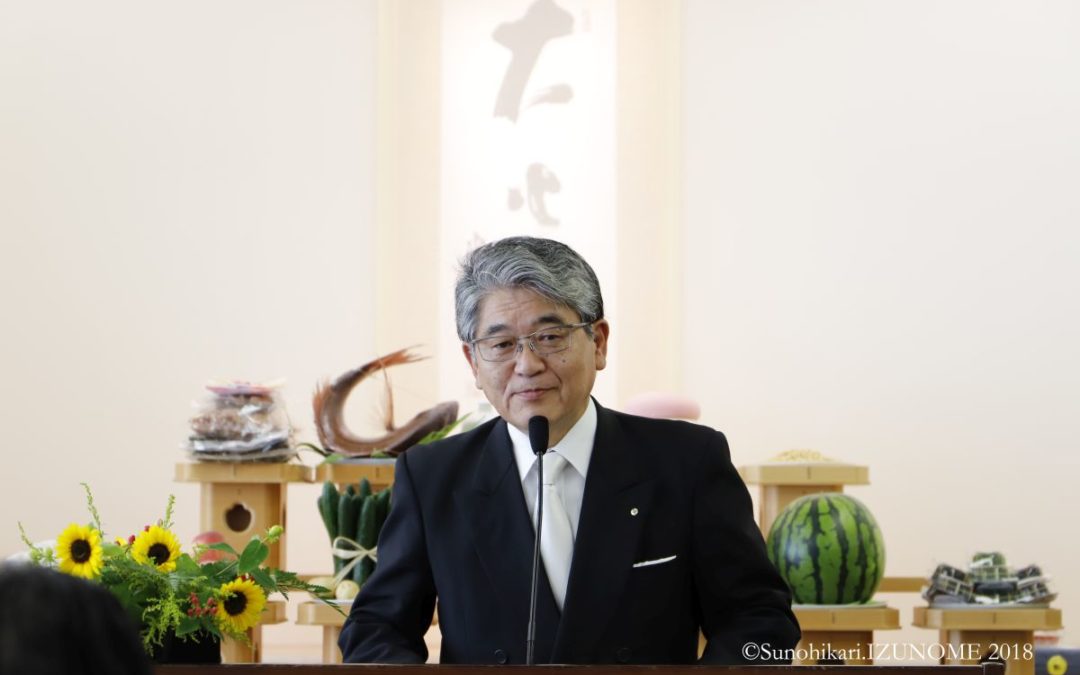 Since Izunome Group’s establishment, the first Monthly Service took place on July 1 at Atami Zuiun-kyo Sacred Grounds Su no Hikari Kyodan Headquarters altar room. On this day, morning and afternoon services were held. The service began with the reading of the Monthly Service Opening Prayer, composed by Kyoshu-sama. The pine branch (symbol of our appreciation) was offered by the officiant, then by President Shirasawa. Next, all the attendees prayed the Amatsu Norito and Zengen Sanji. After the singing of Meishu-sama’s hymns, his teaching was read, entitled, “Sermon on April 11 (at Nagoya Kanayama Gymnasium).” After President Shirasawa channeled group Johrei, members shared their testimonies (one in the morning, another in the afternoon). Next, in the President’s greeting, he pointed out that in order for Toho no Hikari (MOA) and the executives under Mr. Kobayashi to obtain authorization from the Ministry for revision of bylaws, they need to establish a fifth Kyoshu to obtain his approval first. He said, “Perhaps they are intending to select someone from the Board of Executive Directors (umbrella corporation). Or perhaps someone from the staff. Please do bear in mind that they are members just like us and that they may elect a fifth Kyoshu from the membership. “Or, while not likely, they may temporarily establish a ‘Kyoshu of convenience’ for the sole purpose of obtaining approval for revisions to the bylaws. Could they be intending to execute such extreme, arrogant action toward Meishu-sama?” It is still unclear who it will be. Furthermore, he boldly said, “For us, there is no other Kyoshu-sama other than Yoichi Okada Kyoshu-sama. And there is no other person who could be the fifth Kyoshu, other than Masaaki Okada, who is Meishu-sama’s great grandson and who has without a doubt, succeeded the will of Meishu-sama and the current Kyoshu-sama,” and received a big round of applause from the congregation. Many members remained to pray at the Ancestors Memorial Service/Ancestors Anniversary Service held after the Monthly Service. It was the first ancestors service held since the Enshrinement Service on June 28, officiated by Kyoshu-sama himself. On this day, assembling at the Su no Hikari Kyodan Headquarters for the first time, members said things like, “The light from the divine scroll written with daikomyo felt so strong,” “It was sublime,” “We were permitted to have the service at a wonderful place, I am so grateful.”