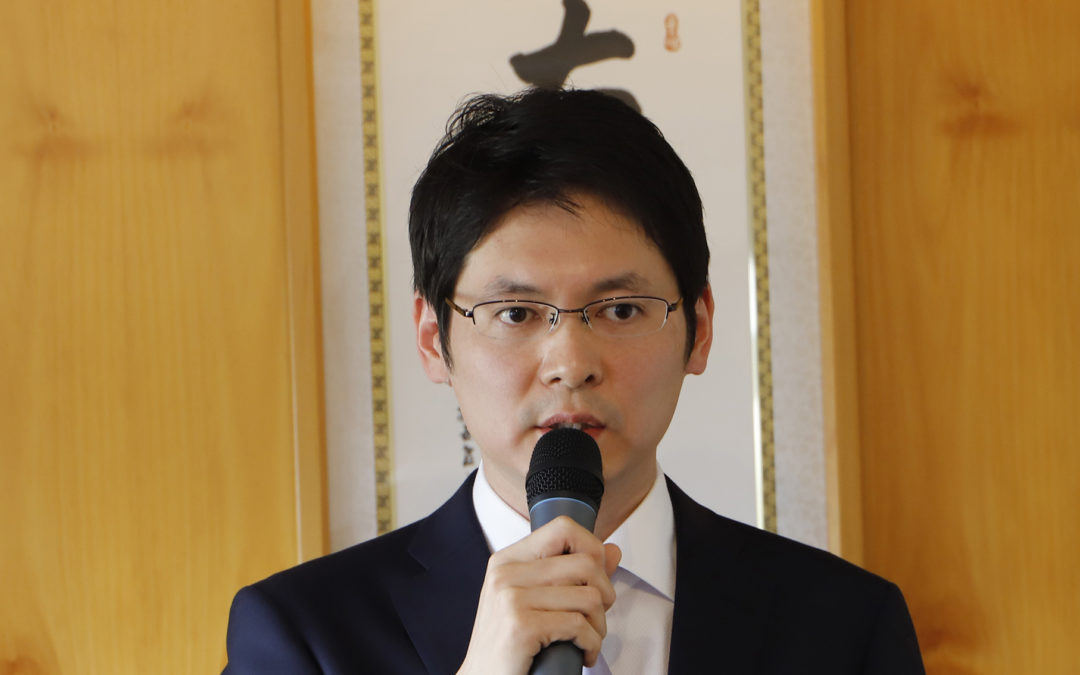 Masaaki-sama, currently on his visit to Australia, was present for Sydney’s Monthly Service and Ohikari Receiving Ceremony.

In a gathering of members from every region of Australia, Masaaki-sama read aloud the Opening Prayer for the Monthly Thanksgiving Service in English, newly created by Kyoshu-sama and Masaaki-sama. Next, under the lead of Masaaki-sama, everyone prayed the Amatsu Norito and read aloud Words of Light, Our Pledge and Words of Prayer.

After group Johrei, the Ohikari Receiving Ceremony took place. Masaaki-sama presented the Ohikari or Sacred Focal Point to three new members and from the congregation came a warm round of applause.

Next, Rev. Horacio stood to give a greeting and expressed words of gratitude to Masaaki-sama for coming all the way from Japan and also introduced Rev. Miura who came as Rev. Shirasawa’s representative to accompany Masaaki-sama, as well as staff from Su no Hikari Kyodan—Izunome Group’s parent church that supports Kyoshu-sama—and Izunome Group’s staff. He mentioned the leaflet “Who We Are” that was presented yesterday by Masaaki-sama for missionary work and called on the members to convey to many people the good news of salvation.

Next, representing the members of Australia, Ana Carolina gave her statement of determination saying, “We have profound honour and remarkable joy in receiving the legitimate successor of the Seat of Kyoshu here in Australia.

Masaaki-sama who stood to deliver a greeting first expressed gratitude to Head Minister Rev. Horacio and the members of Australia for providing this precious opportunity and said that he was moved by Carolina’s bold message of wanting to go forward together with Kyoshu-sama.

Meishu-sama said that he was born anew as the Messiah. Meishu-sama was born anew as the Messiah but I believe that we too are destined to be born anew as Messiahs in the same way. God awakened our faith under the name of Messiah. Meishu-sama said that Messiah and the ‘second coming of Christ’ mean the same thing. Until now, humanity has believed that the second coming of Christ could only be one person. However, I believe that Meishu-sama’s existence is showing us that each and every one of us can be the ‘second coming of Christ.’ We carry with us the soul of Christ, the soul of Messiah. This is a very simple and clear message, but at the same time, I believe it is an unfathomably great and holy message. I believe this is a tremendous message not just for members of World Church of Messiah (Sekai Kyusei Kyo), but for all Christians and Jewish followers, and all of humanity. To God, we live in an important time.”

Meishu-sama and Jesus Christ are one under the holy name of Messiah. Christianity and World Church of Messiah (Sekai Kyusei Kyo) are separate religious groups but they are one. That is because God is one. The message of the one and only God is one. The God of Christianity and World Church of Messiah are the same God. I believe that many people are impatiently waiting for this message. I don’t know how much I am able to do in my lifetime but I believe this message and I sincerely look forward to conveying it to the world. Should people who believe this message increase, I believe the current world will be reversed.

Meishu-sama said that the time for constructing Paradise on Earth has come and us being united under the name of Messiah is certainly, I believe, the completion of Paradise on Earth. Our mission is of great importance so I would like to move forward with courage. This year, as Meishu-sama’s divine work has reached an entirely new phase, it is a new start for us. As we encourage each other, let’s convey this important message to others.

After the end of the service, a BBQ took place on the Johrei Center premise. Masaaki-sama responded to members’ handshakes as well as a commemorative photo and personally interacted with them. For the Australia Church, this day marked a new start.