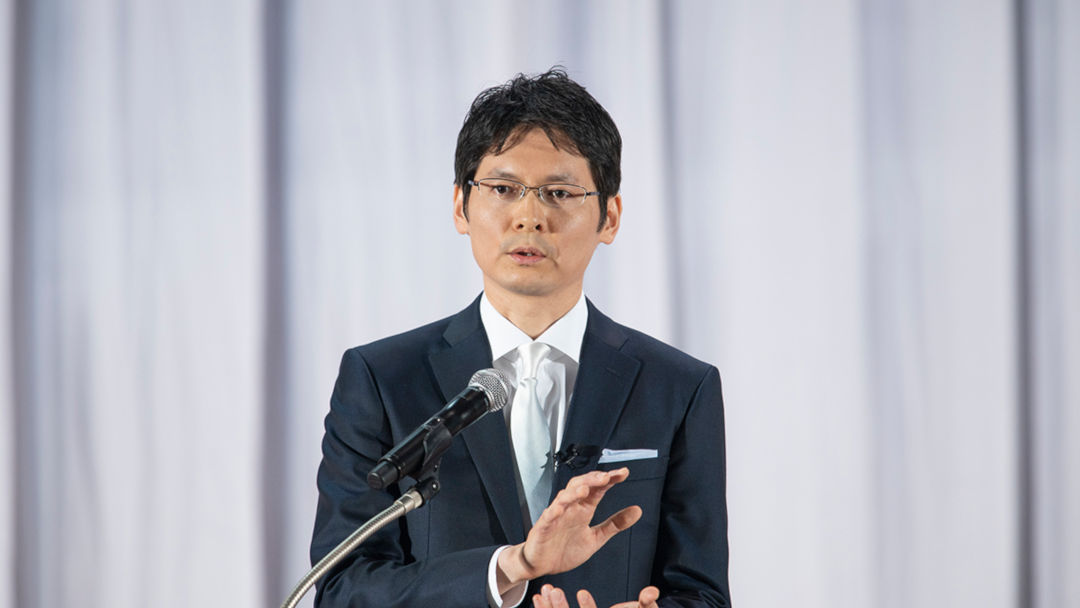 When we hear words like “Jesus Christ,” “Christianity” or “Bible,” what kind of thoughts and feelings well up from our hearts?

There may be some people who think, “Talk of Christianity, again??” or “Is there really any connection between Jesus and Meishu-sama?” Or maybe, “What relation is there, really, between Christianity and Meishu-sama’s divine work?”

So we have Jesus Christ, Christianity, the Bible, and so forth. And now, the question we should be asking ourselves is this: Is there really no connection between those things and Meishu-sama? Or is there?

As all of you know, Meishu-sama began his religious activities with the establishment of Great Japan Kannon Association in 1935. For a while after that, with oppression, World War II and the like, he could not actively nor openly go ahead with religious activities. However, after the war, the freedom of religion was recognized by the new Constitution of Japan, and Meishu-sama advanced divine work through two religious groups by the names of Japan Kannon Church and Japan Miroku Church.

However, that too was a fleeting moment and, on February 4, 1950, on Risshun (Beginning of Spring), Meishu-sama dissolved the two organizations and founded a new religious group, inaugurating Sekai Meshiya Kyo or World Church of Messiah.

At that time, Meishu-sama said that it meant the end of the salvation of Buddha, and we had entered the next stage, meaning the end of Buddhism. And that from then on, God would manifest Himself more and more. But this “God” was not the so-called God of Shintoism. He said it clearly that the God of World Church of Messiah was the Christian God of Jehovah.

Around that time, Meishu-sama was interviewed by the organizational publication of the church. By the reporter, he was asked what the global significance was of World Church of Messiah. To that question, Meishu-sama said that the divine power of Jesus Christ’s salvation for the whole world was truly great, and our new religion would work in concert with Christianity and save humanity.

He was also asked if it was possible to realize world peace with the power of religion, and, to that question, Meishu-sama said, “I believe that it is absolutely possible.” He said, “In the West, there is Christ. In the East, there is Messiah. If these two major forces work in concert with each other – one in the East, the other in the West, and if all members of the two powers diligently fight for peace, eternal peace will surely be brought about.” Meishu-sama left us these clear words. Meishu-sama said these words at a very crucial time of the inauguration of Church of Messiah.

Meishu-sama continued to proceed with divine work carrying this spirit. However, the year before he passed away, on April 19, 1954, Meishu-sama collapsed with the symptoms of a brain hemorrhage.

However, through this incident, Meishu-sama felt that this was, actually, not going to lead him to his death. Rather, he had been born anew. It was not reincarnation. It was a new birth. He left us with these kinds of words.

But this phrase, “to be born anew,” is actually in the New Testament of the Bible. In today’s teaching, “Materialization of the prophecy of the kingdom of heaven,” it starts with, “Reading through the Bible today.” This means that Meishu-sama was reading the Bible.

In reading the Bible, the part “to be born anew” must have tugged at Meishu-sama’s heart somehow. This is what I believe.

The correct wording of this part is “Unless one is born anew, he cannot see the kingdom of God.” It says “one,” as in anyone.

The fact that Meishu-sama says “to be born anew” means, I believe, that when Meishu-sama read that passage, he felt, no doubt, that “Ah, unless one is born anew, they cannot see the kingdom of God – this is a serious matter! It says, ‘one,’ anyone, but I don’t think anyone in humanity has accomplished this.”

At the time of the birth of the Messiah, when he was newly born, Meishu-sama delivered words to his followers. At the time, he said that him being born anew as the Messiah was “a historic incident,” that “for humanity to be saved, ‘I’ have to appear.”

Thinking about all these kinds of matters, there is no way one can say that Jesus Christ, Christianity and the Bible have nothing to do with Meishu-sama.

Rather, when you look at Meishu-sama’s divine work, or his life until his ascension, I believe that Meishu-sama entrusted us with one, clear message. That is, “You, my followers, have me as a prototype. Awaken to God’s life. And wishing to be born anew, walk this path hand in hand with fellow Christians and save humanity.” Clear direction is indicated.

Well, what do you think about the following facts?

December 23. Today is the day that Meishu-sama was born on this earth. Well then, if we ask when Jesus Christ is known to have been born on this earth, that would be Christmas, that is, December 25. There’s only a two-day difference. It’s more or less the same period.

In Christianity, there is Easter. Jesus was nailed to the cross and, for a short time, died. After that, he was resurrected; this is the day he came back to life, in God’s eternal life. Easter is the day observing this. But each year, the date changes due to the vernal equinox, the full moon and suchlike. If you look at the calendar from 1954, Easter is on April 18. It is only a one-day difference. April 19 and April 18.

Is this too, just chance? A coincidence?

Is this coincidence, too? Is the similarity in these examples from Jesus’s life and Meishu-sama’s life purely coincidental?

Meishu-sama spoke to the point of saying “work in concert with Christianity” and used words written in the New Testament. Still further, there are a number of these kinds of facts that cannot be denied. It is no longer possible to say with certainty that they are coincidences.

And so, matters like working in concert with Christianity, Jesus, the Bible – we may feel that Kyoshu-sama is suddenly hammering these out, starting something new. But that’s really not it. As a matter of fact, Meishu-sama has been wishing for this for a long time. That is why he left us with various teachings and examples. It’s just that we have been ignoring them all along.

I am sure that Meishu-sama, truthfully, wanted for his own followers to inherit his true wish as soon as possible. And now, it is my firm conviction that the time has come for us to inherit it.

If we were to say to Christians that “we are going to save all of you,” then that puts us in a place where we can’t work in concert with them and walk hand-in-hand. So why did Meishu-sama use the expression, “I will save Christianity”?

When Meishu-sama said “I will save Christianity,” I believe that he meant this: Jesus Christ was wishing for each person in humanity to be born anew as a Messiah, as a child of God. But that message was not passed on. The significance of his existence, why Jesus appeared on this earth, was starting to die out. But if Meishu-sama inherited the message, and he is the one who has taken upon the role to convey Jesus’s true wish to all people, then I can say that, indeed, Meishu-sama will “save Christianity.” He will save the people of Christianity because He will awaken them to the true salvation of Jesus. That’s what it is.

While we say this “work in concert with Christianity,” it is by no means a way of flattering or behaving modestly toward Christians. I don’t think that’s it. The ones who will lead in the salvation of humanity will, to the end, be us.

We, all of humanity, are always enveloped in various feelings like hurt, worry, anger and suffering within our daily lives. Aren’t we?

In that kind of situation, Christians look to heaven and pray to Lord Jesus. “Heaven, please come to me; love, please be present; salvation, please come; please, show me light; please comfort me.” If the situation betters, they become happy. If it worsens, they become unhappy. As the cycle of ups and downs continues, they pray that one day they may go to heaven.

However, we are different. We believe that heaven, that light, that peace of mind, have already come. They have come and they are within us.

God’s light exists within us, and because it is shining brilliantly on our hearts, something like shadows form. When there is light, shadows are formed. That is because the light of God’s salvation has reached us.

And so, when we meet those shadows, never think, “Not another shadow! Please take it away.” Rather, think, “Ah, because heaven exists within me and light exists within me, God is showing me this shadow,” “I came to save this,” or “Together, let’s return to heaven, the world of light.” We can say these things. This is a major difference.

But actually, heaven exists within each one of us. Each one of us is a model of heaven, a prototype. Should people who think in this way increase, not only is it responding, in the truest sense, to the spirit with which Meishu-sama constructed the Sacred Grounds, it is serving in the divine work of Meishu-sama’s wish of constructing a heaven on earth.

And so, when Meishu-sama says, “work in concert with Christianity,” I don’t know how God will proceed with that, but instead of waiting, we will construct heaven, we will construct a world of light. This is the mission assigned to us to carry out.
And on our path going forward one heart with Kyoshu-sama, should people with whom this message of salvation of ours resonates appear, I believe the result will ultimately be working in concert with Christianity.

As I just said, the fact that we have received a command from God to “construct heaven,” “construct a world of light,” this in itself is a very grave matter. By nature, we did not place importance on God at all. But now, we are being used in God’s great divine work. This is truly a grateful thing.

Today is a joyous day marking Meishu-sama’s birth, but it is also the time of Christmas, Jesus Christ’s birth. Because we cannot go forward with today’s divine work with one or the other missing, it is impossible to say that one is above the other. Both have received God’s soul, and we are seeking to join them.