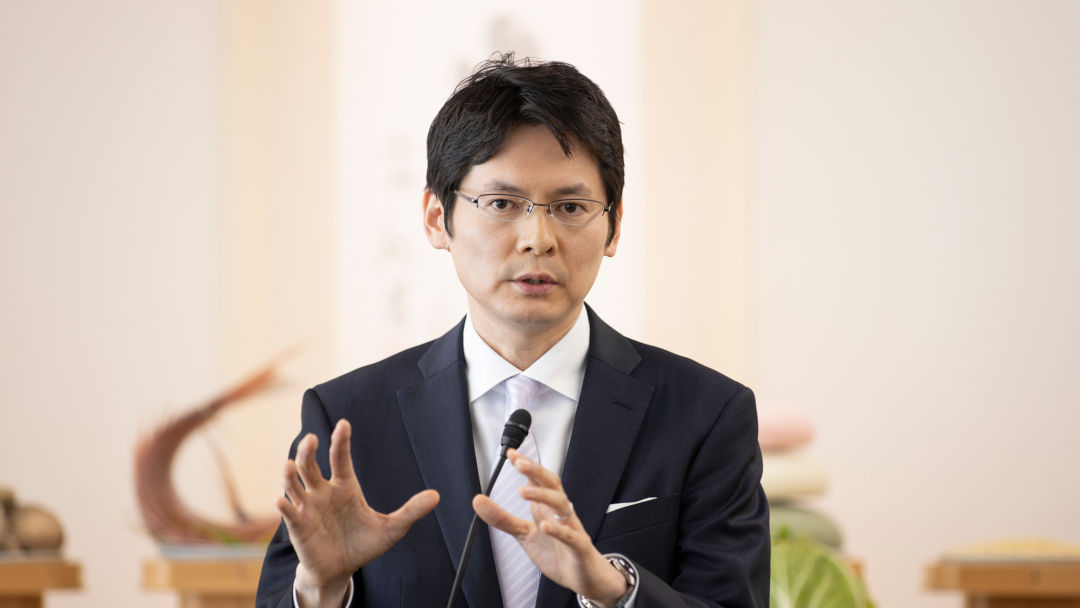 As it was also said in President Narii’s greeting, we are finally going forward under the name Sekai Meshia Kyo or World Church of Messiah from next month’s Risshun (Beginning of Spring).

Right now, what is each one of you feeling?

I don’t know about you, but in my heart is a burning feeling, something ablaze within me.

70 years ago, 1950, like a lion roaring out to the world, Meishu-sama voiced out the following decisive words: “World Church of Messiah will work in concert with Christianity and advance the salvation of humanity.” And with those words, he founded Sekai Meshiya Kyo, World Church of Messiah.

That was in 1950. From there, in the five remaining years of his life, Meishu-sama advanced divine work under the name of World Church of Messiah.

However, it was March of 1957, two years after his ascension that Sekai Meshiya Kyo was changed to Sekai Kyusei Kyo or World Church of Salvation. 63 years have passed since then.

The name of the church that Meishu-sama had chosen, just two years after his passing – only two years – was changed.

However, I do not think that is so.

Meishu-sama gave us various messages in his teachings on why he chose the name Sekai Meshiya Kyo, which he founded 70 years ago. In one of those teachings, he touches upon the Chinese characters used for Meshiya, meaning “Messiah,” usually pronounced “kyu-sei,” meaning “salvation.”

The reason why I am talking about this is because the three phonetic syllables for Meshia or “Messiah” that we use in Sekai Meshia Kyo is not “me-shi-ya” but “me-shi-a.” Sekai Meshiya Kyo that Meishu-sama founded 70 years ago uses the three syllables “me-shi-ya” for the Chinese characters of kyusei meaning “salvation.”

But as I just said, when Meishu-sama founded Sekai Meshiya Kyo, he gave a message about this name.

In it, there is a point I’d like to mention. Meishu-sama said that a name such as Sekai Kyusei Kyo having the two Chinese characters of kyusei read as “kyu-sei” would be “Eastern in nature and uninteresting.”

Furthermore, he said that, with such a name, salvation would be limited to the East. In other words, it is not a suitable name for the salvation of all humankind. And so that is why he assigned the phonetic syllables “me-shi-ya” meaning “Messiah” to the Chinese characters of kyusei meaning “salvation.”

That is to say, we have been using Sekai Kyusei Kyo or World Church of Salvation for 63 years and use it even now as if nothing was wrong; the name in which we read the Chinese characters for kyusei as “kyu-sei” meaning “salvation;” the name that Meishu-sama said was “Eastern in nature and uninteresting” and was not suitable for the salvation of humankind.

I feel that we have done a truly regrettable thing to Meishu-sama.

For Meishu-sama, this is the cherished identity of our church. We changed it, ignoring the will of Meishu-sama, and went on for 63 years.

But it is not this either. In the first place, the word “Meshia” with an “a” did not exist during Meishu-sama’s lifetime.

Some of you may already know this, but during Meishu-sama’s lifetime, words of that kind such as Itariya (Italy) or Ajiya (Asia) were all spelled using the “ya” syllable. In 1991, the nation’s policy changed and all those words are now spelled with the “a” syllable. Today, we no longer use Itariya, but rather, Itaria; no longer Ajiya, but Ajia.

As such, Meshiya is now Meshia. So, if you look for Meshiya in the dictionary, it will not come up. It will come up as Meshia. Conforming to his time’s customary practices, Meishu-sama used Meshiya. Were Meishu-sama here now, he would naturally follow today’s practices and use Meshia.

However, less than a year after the church’s founding, from around October of 1950, within his teachings, alongside the use of the Chinese characters read as “me-shi-ya” in Sekai Meshiya Kyo, he clearly uses only phonetic syllables for Meshiya, in phrases such as Meshiya Kyo or “our Meshiya Kyo is” without the Chinese characters. Even in the hymns we offered today, only the phonetic syllables were used in the first hymn. (“The world came to a standstill / With no way forward or back. / Alas! / What would become of the future of humanity / if Meshiya Kyo (Church of Messiah) does not appear!”)

The words of this hymn, themselves, are direct words from Meishu-sama, and here, too, he uses the phonetic syllables for Meshiya Kyo.

And so, at the beginning of the church’s founding, there may no doubt have been a significance in using the Chinese characters and the phonetic syllables together. For Meishu-sama, “At any rate, I want to put forth the word ‘Meshiya (Messiah)’. I want to put forth the sound of ‘Meshiya (Messiah).’” I believe these thoughts were very strong. That is why in less than a year after the founding of the church, Meishu-sama started to use the phonetic syllables for Meshiya in Sekai Meshiya Kyo in his teachings.

So, I regard the use of these phonetic syllables in Meshia Kyo, our Sekai Meshia Kyo, as Kyoshu-sama receiving Meishu-sama’s wishes, and thus, what Meishu-sama believed to be the most fitting name for the church to advance his religious activities, he bestowed upon us. I believe this is what will begin from this coming Risshun.

70 years ago was the first Risshun since Sekai Meshiya Kyo, World Church of Messiah, was founded – the very first Risshun when the church was founded. At that time, Meishu-sama released several hymns. The first hymn read as follows:

“How joyous it is! / This year, / Today, / On Risshun when spring begins, / I have founded Meshiya Kyokai (Church of Messiah)!”

Meishu-sama uses the phrase Meshiya Kyokai (instead of Meshiya Kyo, both of which mean Church of Messiah). He may have been intending to go with the term Meshiya Kyo (more literally, “Messiah Religion”) but as you can see, when he announced the inauguration of Meshiya Kyo, in the very first hymn he uses the words, Meshiya Kyokai or literally “Messiah Church” (The word kyokai has a strong connotation of a Christian church).

Today, all of our centers of religious activities are called “church,” and of course, the word “church” is a term with a Christian ring.

As Meishu-sama said to the point that Church of Messiah would work in concert with Christianity, he was so bold as to choose a sound with very Christian overtones in the first hymn to be offered commemorating Meshiya Kyokai, Church of Messiah, and then have his followers offer those hymns to God.

Whether Meishu-sama was present or not at that service, I don’t know, as he usually did not attend the services themselves, but he had his followers offer those hymns to God. As his followers, we must take Meishu-sama’s thoughts and feelings in composing this hymn very seriously.

From here on, from Risshun, we will be advancing activities under the name of World Church of Messiah. There is this question: Are we worthy enough existences to be using the name that Meishu-sama used?

Is it because we have some kind of merit that we are allowed to use this name? Did we have the right attitude toward Meishu-sama? Or the right attitude when serving? Did we have some sort of accumulated virtue? Or maybe Meishu-sama recognized something in us? Is that why we are allowed to use the name World Church of Messiah? Are we worthy enough existences to use this name? Or not?

I believe that we are not actually worthy existences to be inheriting the name that Meishu-sama chose.

Also, the year before Meishu-sama passed away, even though he was truly suffering from brain hemorrhaging, he left us with words that he believed to be an important message: “to be born anew.” At the same time, he also left us with words regarding Johrei. He said, many times, that “Johrei is not as important now. From here on, we enter the world of sonen.” Even in regard to these words on Johrei, just how much did we seriously receive Meishu-sama’s will and wishes?

Rather, haven’t we come all this way until today doing divine work the way we wanted?

Also, what about this: After Meishu-sama passed away, Sekai Kyusei Kyo established Kyoshu-sama as the one who succeeds the sacred work of Meishu-sama and the one who is the central existence of the church. To this Kyoshu-sama, a few people have been taking actions such as secretly following him and ousting him. But actually, this is a reflection of ourselves.

In this sense, we have truly rebelled against God, against Meishu-sama and against Kyoshu-sama. We have rebelled, but, in order for God to advance His salvation, He one-sidedly united us to the name of Messiah, forgave us and is wanting to use us in His divine work. He is doing this one-sidedly.

However, regarding this re-inauguration of World Church of Messiah, each one of you is being entrusted in deciding whether you take in what I am saying now or not.

As an example, if you were a child, you have a father. Let’s say you don’t listen to him and have long rebelled against him. But to you, his own child, he says, “I’ve forgiven you. Won’t you come live with me in my house?” To that, as his child, we say, “I haven’t seriously rebelled. So I don’t need to go back. I’ll continue doing things the way I want.” And we wander about endlessly – there’s this option.

Or it is like this: We may say back to him, “You say that but I haven’t rebelled against you. I haven’t done that so, as expected, I will return to your home, and I will use your things – God’s love, His power and His light, so to speak – as I have been using all this time.”

But in actuality, God is saying to us, “I think you have been rebelling against me all this time. But I have forgiven you so won’t you return to me and live together with me?” To this, if we are able to think something like, “You have forgiven even someone like me, united me to the name of Messiah, and I can live with You, God, my true parent. Please use me hereafter in Your divine work,” and if these thoughts of ours extend to the surrounding people, I believe that this is God’s true love that spreads and is conveyed to the people around us.

If we do so, there is no doubt that this would make God happy. And if God’s happiness spreads throughout the world through us, I believe that World Church of Messiah will surely become a great religious organization.

Holding tight to these hopes, I want to walk together on this path with all of you hereafter, and, together, with these sentiments, I would like to welcome the day of Risshun next month.