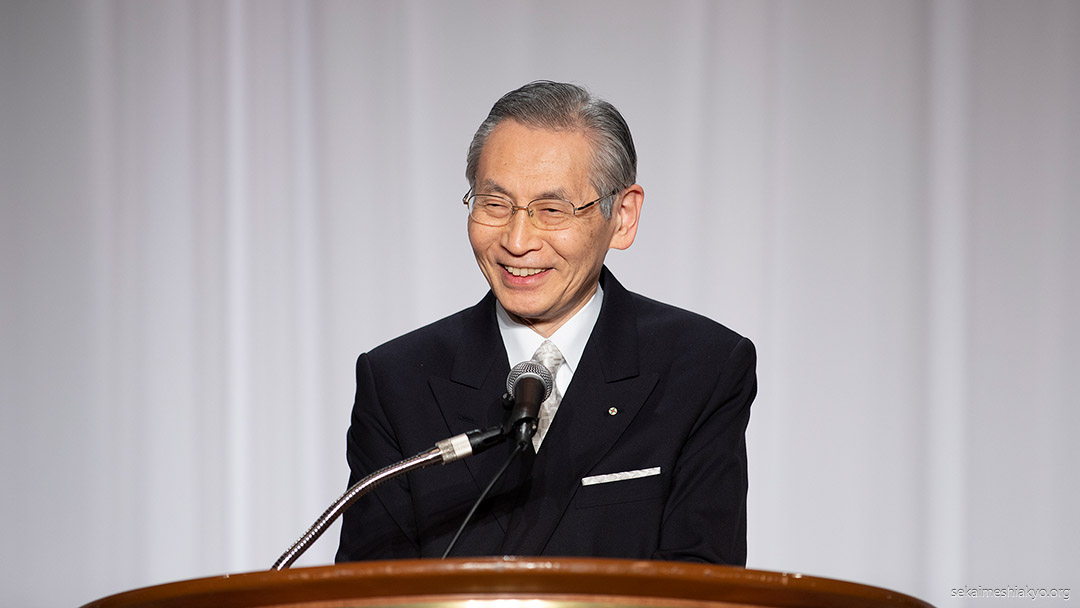 Congratulations, everyone, on today’s World Church of Messiah Risshun (Beginning of Spring) Service.

Since the Paradise on Earth Service the year before last, we have been holding services at this RIHGA Royal Hotel in Osaka. Including today’s service along with others we have held here, we have received tremendous understanding and cooperation from all the staff at the hotel, in addition to their consideration on numerous matters. Here, I would like to give my heartfelt thanks to everyone at RIHGA Royal Hotel Osaka. Thank you very much.

The first hymn we offered at today’s service was this:

“How joyous it is! / This year, / Today, / On Risshun when spring begins, / I have founded Meshiya Kyokai (Church of Messiah)!”

This was the very first hymn Meishu-sama composed exactly 70 years ago in his series “Risshun Hymns.”

World Church of Messiah is the name of the religious organization Meishu-sama founded 70 years ago, in 1950, on the day of Risshun.

At the time of the founding, Meishu-sama said, with conviction, that it was the result of God’s will, that the power to save all humanity came from the Messiah and that salvation would be achieved through working in concert with Christianity.

I believe that the name of World Church of Messiah – the name that Meishu-sama himself named – is imbued with his unwavering determination to respond to the divine will that was entrusted to him.

And today, after 70 years since its founding, you will be bearing the very name that Meishu-sama named with profound feeling and thought, and, following in the footsteps of Meishu-sama, you have made an oath to follow the divine will of making all humanity be born anew as God’s children – the Messiahs.

Out of all the members, whom Meishu-sama so loves, many have been born today who are determined to inherit his true wish. So many of you have been born!

How long Meishu-sama has waited for this day to arrive!

I can almost feel his jubilation, his joy.

This joy is in fact the joy of the one and only Lord God who is our Lord of creation.

The Lord God decided to start the work of creation in order to bear children in His image and likeness.

Before setting out on His work of creation, God, in the world of origin, in heaven, bore His very own spiritual bodies – His divine spirits, that is, our souls – and named each one of them with the same name – Messiah.

The name “Messiah” is impregnated with the enormous joy of the Lord God as a parent who was able to bear His very own souls.

Our true self is this soul of God named Messiah.

We were sent to the earth and became an individual only through receiving a soul of the Lord God, the breath of life that is the power of the soul and the consciousness that is the vessel of the soul.

God was “God” from whom we sought protection and salvation that fit our needs and desires. Even though we may have said, “I offer my gratitude to God,” we judged whether “God” worked or not and evaluated how much “He” worked based on our own convenient yardsticks.

We did not realize that we, in fact, were acting like we were God.

This posture of dishonoring and disrespecting God is, truly, the sin that humanity was burdened with.

While we were burdened with this sin, the Lord God could not welcome us into His heaven, make us inherit His consciousness and live with us.

That is why the Lord God who is full of grace wished for the sins of humanity in the past, present and future to be atoned for, and, to atone for them, approximately 2000 years ago, He sent Jesus Christ to this world.

Jesus surrendered the very blood that was running through his body to God the Father, the Lord God, asked Him for the forgiveness of the sins of all humanity and committed his soul into the hands of God.

The Lord God received the blood Jesus offered to Him as the blood of atonement that can atone the sins of all humanity in the past, present and future. God, thus, forgave all of humanity, made them sinless, resurrected Jesus from the dead and made Jesus the Son of God, the Christ, the Messiah.

All of humanity were forgiven of their sins through the blood of atonement of Jesus who was sent by God with His boundless love.

As such, the Lord God prepared a way so that all of humanity in the past, present and future are able to return to heaven as ones who have been atoned for and forgiven.

This was a major turning point in God’s work of creation and was an immeasurable blessing for all humanity.

God has already put an end to our ways of life where there seemed to have been no ending, where we were running in circles.

Our consciousness – our mind – has already been atoned for, forgiven, accepted by God and is now being nurtured in the second phase of creation that will make all of humanity God’s very own children.

I believe Meishu-sama perceived this fact that all of humanity are now being nurtured in this second phase of creation as the “transition from night to day in the spiritual world” and is now wishing to declare this blessing to all of humanity through us.

I believe Meishu-sama founded World Church of Messiah in order to save all of humanity without exception through the power embedded in the name of Messiah that brought forth this great transition.

Facing the danger of losing his physical life because of the stroke, Meishu-sama, as our representative, repented his mistake of considering the soul within him as his own soul and, just like Jesus, committed his soul into the hands of God.

The Lord God accepted it, endowed Meishu-sama with a new soul and bore him as His Son.

Through receiving the stroke, Meishu-sama was able to overcome the existence of “death” that all humans carry within themselves. That is why, I believe, Meishu-sama said at the time when he announced his birth as the Messiah that this new birth was a “miracle beyond a miracle” and came to a firm conviction that being born anew was something different from reincarnation, as he also stated clearly at the time. I am certain that Meishu-sama announced his birth as the Messiah with indescribable joy as he came to a realization that eternal life existed within him.

We have been dishonoring and disrespecting God, but God, through Meishu-sama, has woken us up from a long sleep.

While not deserving it at all, we have been made to know the one and only God and the name of Messiah.

We, in order to respond to this immense love and grace of God, have made a decision to serve in the will of God – the will that God makes all of humanity His own children.

The Lord God, I believe, has gladly welcomed us into His heaven, saying, “How good it is that you remembered Me and came back!”

God is the Parent of our souls.

Should you be a parent, regardless of what kind of child you have, if he or she remembered you and came back to you, the happiness and joy would be beyond words.

In fact, the Lord God is now using our hearts and minds – the very end of His creations – so that we humanity can also experience and sense true joy, the joy of God.

In our hearts and minds, on the one hand, there are joyful and happy feelings. On the other hand, there are sorrowful, bitter and sad feelings. Likewise, there is a heart that wants to accept the name of Messiah and a heart that does not want to accept it. I believe God, through us, is uniting these conflicting feelings as one and is trying to share His true joy with all of humanity, without exception.

Responding to this heart of God, we must return to heaven and surrender, in the name of Messiah, which is one with Meishu-sama, our conflicting feelings to God as one. Why? Because within each one of us is a church that is united with the name of Messiah, and we, together with everyone and everything, have a duty to be used in the divine work of creating a future enveloped in the true joy of God.

And remember: The Lord God lives within us. That means we need to acknowledge that the joy of God has already reached our hearts and minds – the very end of His creations – and return this blessing, this glory, to Him.

70 years ago, our souls attended and witnessed the founding of World Church of Messiah! Through Meishu-sama, we, at that time, received the divine will that accomplished the founding!

That is why the Lord God is now allowing us to bear the name World Church of Messiah and serve in His will.

It is a tremendous blessing that we now know this: that we have received the soul named Messiah which is imbued with the will of the Lord God.

But I would like to ask: Have we ever communicated this grave matter to God? I think we have not.

So let each one of us, now, with our own will, say this to God: “You allowed me to make Your soul as if it were my soul, but it was actually Yours. Forgive me, O God.” In this way, following Meishu-sama, let us commit our souls into the hands of the Lord God.

Let us also acknowledge that within our hearts are many who still do not know the true joy and salvation, just like we did not know in the past. So let us serve in the work as a church that mediates, return to heaven together with all of them and say to God: “O God, many have returned to Your heaven now. If You so wish, please could You welcome us as Your children?”

To close, let us all offer our gratitude to Meishu-sama and God, who is with Meishu-sama, for allowing us to bear the name of World Church of Messiah, and, from today, let us make an entirely new, fresh start and walk the true path of faith that Meishu-sama has shown to us!

May the grace and peace that belong to the church bearing the name of Messiah be, through all of you, shared with everyone and everything.