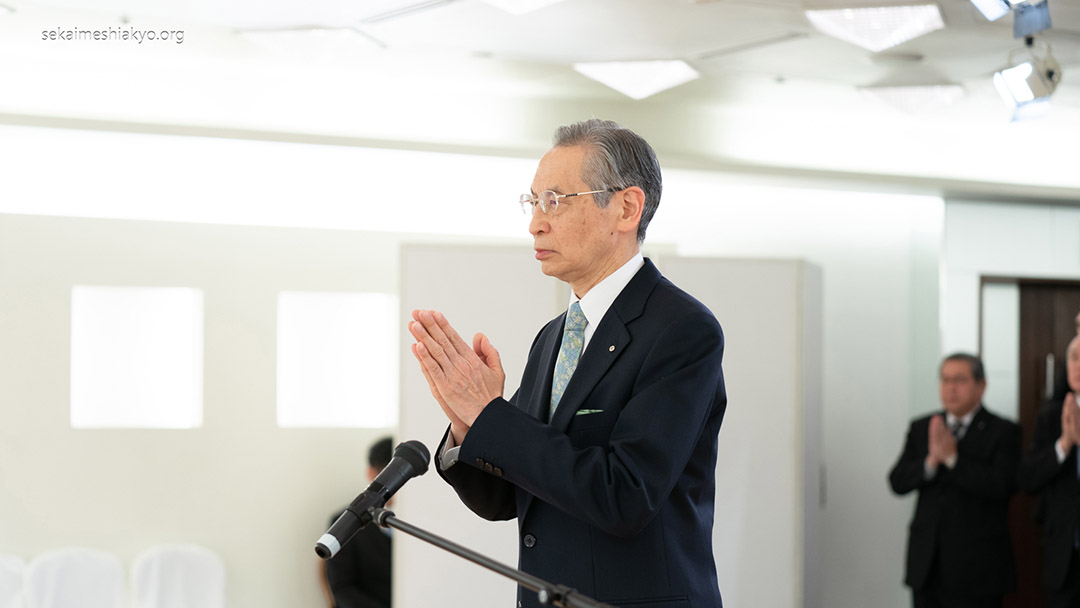 Under the presence of Kyoshu-sama, his wife, Mayumi-okusama, and his successor, Masaaki-sama, also attended. Members of the board of executive directors, including President of SKK, Rev. Nakadomari, President of World Church of Messiah, Rev. Narii, along with regional directors, directors of the board, senior staff of headquarters and ministers from overseas who attended the Risshun Service, totaling 86 people, attended the meeting.

To begin, under the lead of Kyoshu-sama, everyone prayed the Amatsu Norito, then received Johrei from Kyoshu-sama. This was followed by greetings from President Narii and President Nakadomari and declarations of resolve from representatives Rev. Takahara, Regional Director of the Chubu Region and Rev. Kurosawa, Area Head of Mie.

Next, Kyoshu-sama’s successor, Masaaki-sama, gave a greeting. Afterwards, Kyoshu-sama delivered his message. Finally, centering around Kyoshu-sama, Mayumi-okusama and Masaaki-sama, a commemorative photograph was taken to close the meeting. Those who attended the meeting set out from the venue with the joy that the time has come for Meishu-sama’s wishes to finally be realized and the anticipation of serving in the true divine work.