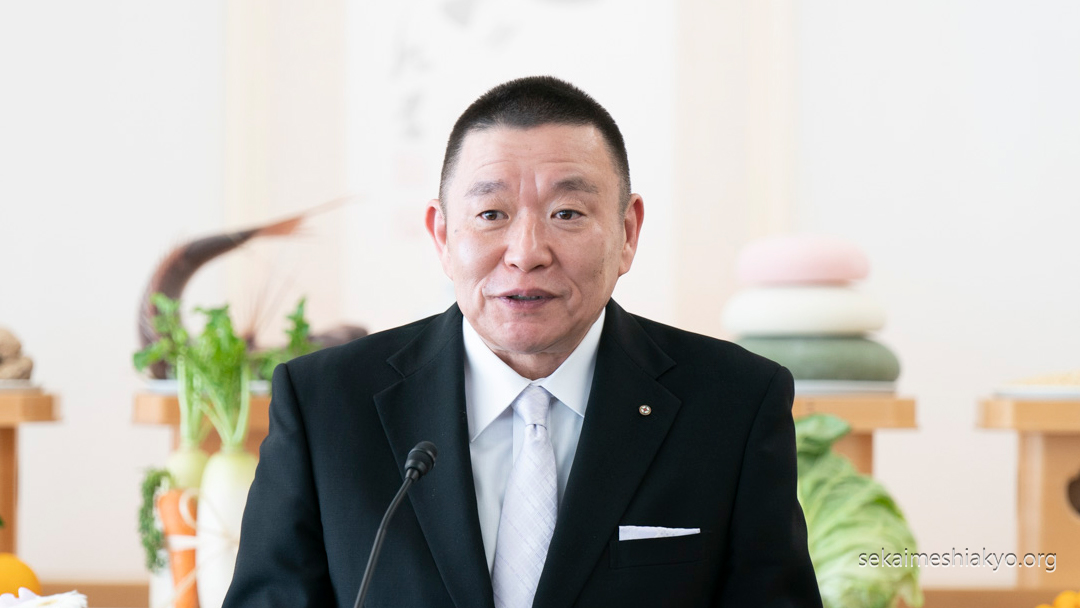 Congratulations everyone on the Prayer for Abundance Service.

The time when the sunlight of spring begins to shine and its new breath enlivens our hearts has come.

Enveloped in the warm prayers of Kyoshu-sama, who determines Sekai Kyusei Kyo’s teachings and oversees all rituals and ceremonies, the Prayer for Abundance Service was allowed to solemnly take place just now. For this, I offer my sincerest gratitude to God and Meishu-sama who is with God.

At today’s service, we have offered all the seeds sent from all of you including farmers from across the country practicing Nature Farming and prayed for abundant harvests throughout this year.

I, who was just permitted to become a member of World Church of Messiah, projected myself onto the seeds that were offered at the altar, and I prayed that I would be allowed to grow as its member receiving God’s nurturing under Kyoshu-sama.

To begin, not too long ago, under the presence of Kyoshu-sama, we received permission to hold a historical Risshun Service in which World Church of Messiah that was founded by Meishu-sama resurrected, transcending 70 years, together with members from the entire country and overseas countries who hurried to join, totaling approximately 5,200 people.

Just a moment ago, representing members all over the country, we heard a report from Ms. Yoshie Goto from Chubu Region’s Okazaki Church on the important realizations and joy she received through Kyoshu-sama’s guidance.

I regarded this report as a divine blessing from God for each and every one of us, and together in thought, I reported this to God. Thank you very much.

Now then, at the Risshun Service the other day, we received the first message from Kyoshu-sama as members of World Church of Messiah.

World Church of Messiah is the name of the religious organization Meishu-sama founded 70 years ago, in 1950, on the day of Risshun.

At the time of the founding, Meishu-sama said, with conviction, that it was the result of God’s will, that the power to save all humanity came from the Messiah and that salvation would be achieved through working in concert with Christianity.

I believe that the name of World Church of Messiah – the name that Meishu-sama himself named – is imbued with his unwavering determination to respond to the divine will that was entrusted to him.

And today, after 70 years since its founding, you will be bearing the very name that Meishu-sama named with profound feeling and thought, and, following in the footsteps of Meishu-sama, you have made an oath to follow the divine will of making all humanity be born anew as God’s children – the Messiahs.

In receiving this time’s guidance, along with overflowing joy in my heart, there is a matter I confirmed within myself.

At the Su no Hikari Church Grand Autumn Service in 2003, my revolution of faith began there. It was the first moment I received Kyoshu-sama’s message regarding the divine work of an entirely new phase of salvation – the creation of God’s future.

For me, I am sincerely sorry for this, but I was not able to understand it soon enough. At the time, the only feeling I had was that, no doubt, something exceedingly grave, some important guidance was being given. I vividly remember that this left a powerful impression in my heart.

Since then, until today, I have been allowed to always be under the guidance of Kyoshu-sama. We received guidance that God’s purpose is only one – that is to make all of humanity and all the ancestors, in the name of Messiah, which is one with Meishu-sama, be born anew as His own children, as Messiahs. And owing to Kyoshu-sama, I became one who was allowed to know this God’s will that penetrates all and to know the essence of Meishu-sama’s teachings.

God lives within us; the heaven in which God accomplished everything exists within us; I am one who has received the immeasurable love and forgiveness of God; the importance of being allowed to be used in the divine work of sonen, the missionary work of God welcoming all into His heaven; the great transition to the divine scroll with “Great Divine Light” （Daikomyo goshintai）; and this time’s enormously grave transformation of Johrei.

Kyoshu-sama has guided us on each of these matters. Through it, I have been guided to World Church of Messiah and am now advancing straightforwardly on the path where I can be used in God’s truly noble divine work.

Right now, from the bottom of my heart, I am filled with such deep emotion.

From here on too, in everything, I would like to go forward receiving the will of Kyoshu-sama. I would like to do this by all means. With this one point, I pledged at the start of World Church of Messiah from my innermost feelings to single-mindedly strive for further revolution of my own faith.

I cannot help but want to respond, by any means, to the will of God, the will of Meishu-sama and the will of Kyoshu-sama, who guided us to World Church of Messiah.

In the February issue of Glory, eight hymns by Kyoshu-sama were published including two of the following：

“O the glorious light of the Messiah. / The whole Universe and all its dimensions are filled with it. / And it shines within us, too!”

“We have been atoned for and forgiven of our sins. / Let us now go back to heaven through the Name, / And through it only!”

Even if it is only a part, I would like to receive Kyoshu-sama’s will embedded in these hymns.

Including the distribution of the leaflet, I would like for us to always turn our hearts to the heaven within us in the various affairs of our daily lives and to surrender to God all the thoughts and feelings that come through us as ones who are forgiven and saved in the name of Messiah. I would like to single-mindedly serve together with all of you in the practice of such divine work of sonen.

Also at this time, the start of World Church of Messiah, in receiving guidance from Kyoshu-sama, the name of the church publication has been renamed from Shin-zen-bi （Truth, Goodness and Beauty） to Glory （in English）.

From August 1950 until his ascension, Meishu-sama kept the name of World Church of Messiah’s organizational publication, Eiko （Glory）. “Glory” is a Christian term, meaning the brilliant light of God.

In our February issue of Glory, regarding the great importance of receiving this word, once again, for World Church of Messiah’s publication, we have received a manuscript from Kyoshu-sama’s successor Masaaki-sama, which is published in its entirety. I am sincerely grateful for this.

In this manuscript, Masaaki-sama pointed out the following words from one of the pioneer ministers previously published in the article, “On the Publication of Eiko （Glory）,” from issue no. 67 of Eiko at the founding of World Church of Messiah of Meishu-sama’s time：

“On the release of Glory newspaper, let us loudly shout out ‘hallelujah’! Glory to the ones who believe in the Messiah and who serve the wishes of the Messiah!”

When I read this account in Eiko taken up in Masaaki-sama’s manuscript, I was moved to tears by the posture of those within the pioneer ministers, including Meishu-sama’s close assistants, in accepting Meishu-sama’s will embedded in the founding of World Church of Messiah head on, and by the fact that there were people who did whatever they could to convey it.

At the same time, I am asking myself if I am now facing his will with those kinds of thoughts and feelings. I determined that precisely because World Church of Messiah has just resurrected, it is time that the thoughts and feelings of those pioneers must firmly be in my own heart.

At the end of his manuscript, Masaaki-sama enlightened us with the following：

On the release of World Church of Messiah’s periodical, Glory, may I, together with all of you, shout “hallelujah!,” believe in the soul of the Messiah living within us and serve God with all my heart and soul so that the will of the Messiah may be accomplished.

In the name of Messiah, which is one with Meishu-sama, glory to the eternal God and Him only.

As a member of World Church of Messiah, I would like to receive this will of Masaaki-sama, and under Kyoshu-sama, without even taking a glance toward fussy voices, go forward at full speed on the path of conveying the truth of the name of Messiah.

On another topic, at the end of this month, as a representative of Kyoshu-sama, Masaaki-sama will be making a missionary visit to Australia. And on March 29 in Sydney, “Together with Masaaki-sama – Australia Grand Autumn Service & World Youth Gathering” will be held, with many members from around the world scheduled to participate. Also, with youth as the focus, approximately 30 people from Japan are planning to participate. （As of March 9, the visit has been postponed until further notice due to the worldwide spread of COVID-19.）

As members from 13 overseas countries attended the recent World Church of Messiah Risshun Service, now, the true salvation in the name of Messiah that Meishu-sama has revealed to us steadily continues to spread throughout the world.

“World Church of Messiah is established / First in heaven, then on earth. / Its salvation is all-encompassing!”

As members of this religion, let us exuberantly walk this path of true salvation that has not existed since the beginning of time.

Finally, on the 21st of this month, we have the permission to hold the World Church of Messiah Grand Spring Service at Hotel Nagoya Castle under the presence of Kyoshu-sama. （As of March 20, the service has been cancelled due to the spreading of COVID-19）.

I look forward to seeing all of you, members from all over the country.