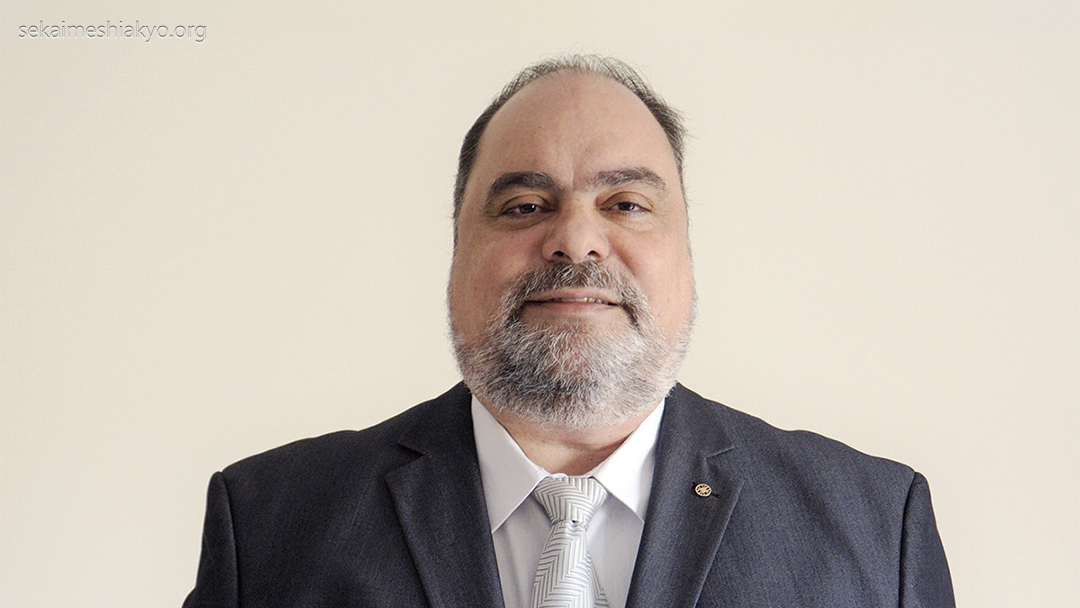 My name is Evangelos Kreatsoulas. I am Brazilian-Greek and originally from Rio de Janeiro, Brazil. I have been a member since December 1980. I was a ministerial trainee from the 10th seminary class.  I was ordained as a religious minister in April of 1991 and have been serving in Greece since May of that same year.

I would like to state the facts as I experienced them since becoming a trainee in 1985, especially concerning the latest happenings that took place in Japan as I witnessed them.

Kyoshu-sama wishes to create a totally new church but in line and likeness of the church during Meishu-sama’s time and his pioneers. In other words, a cheerful, free and open church; one with human warmth, where goals, new membership, attendance and donations are only the by-products of the happiness and gratitude that members feel.

As a trainee, I was present at the Sacred Grounds in Japan during the purification of our church in the ’80s. I was there when the Shinsei group (currently Izunome Kyodan) won the lawsuit and Rev. Matsumoto, with the full support of Rev. Watanabe, was recognized as the legitimate president of Sekai Kyusei Kyo. I was also there in late September of 2017 and witnessed as a mere observer the National Church Heads Meeting, where the horrible “evidence” gathered from spying on Kyoshu-sama was presented by Mr. Kobayashi.

I was also present during the Grand Autumn Service in Osaka on October 8, 2018, when Kyoshu-sama officiated the service with the presence of 5,300 people. It was a paradisiacal atmosphere, with joy radiating from members’ faces, and Kyoshu-sama and his family were shining, happy, humble and accessible. This brought back memories from many years ago, when Rev. Watanabe was still only president of the church in Brazil and services were held at the regional church in Rio de Janeiro and at the headquarters in São Paulo – an environment of celebration and light. Those who are from that time know what I am talking about.

I also visited the Hall of Worship (Kyusei Kaikan) which has been temporarily taken over by Mr. Kobayashi and those who support him. Even though everything seemed beautiful and marvelous, materially speaking, I felt it as a hollow, empty place, with no energy, no happiness, devoid of everything, devoid of spirit.

While in Osaka where the service was held, a convention hall, in contrast, seemingly cold and lacking material beauty, was filled with warmth and beautiful feelings from the participants.

It is interesting. Mr. Kobayashi and his group took over the buildings with no members and the group that supports Kyoshu-sama has the members and no buildings. How ironic.

I am sorry but after almost 40 years of membership, of which 35 was as a staff minister and 29 of those in Greece, Russia and surrounding countries, I have no desire to see my faith become an object of convenience nor desire to worship a materialistic faith. I do not want to see my religion become an object of public function nor see the Sacred Grounds become a “theme park.” I am not going to allow people like Mr. Kobayashi and the reverends and ministers who follow him to destroy my faith rooted in Meishu-sama’s wishes, which have been clearly expressed in his teachings that Kyoshu-sama is making us re-read with a 21st-century perspective.

The spiritual and legal representative of Meishu-sama on this earth is Mr. Yoichi Okada, the legitimate Kyoshu-sama, who is trying to take us back to the initial wishes of Meishu-sama with a renewed faith, seeking harmony with all religions and philosophies.

From my point of view, as a simple minister that I am, each spiritual leader (each Kyoshu-sama) seeks ever more to deepen his or her understanding of Meishu-sama’s teaching as well as studies and learns about all other religions in the world, since they all come from the same Supreme God in His many manifestations through the many messengers sent to Earth from primordial times.

Not only do I not see a problem with Kyoshu-sama being part of any group studying the Bible, but I also hope that he would participate in groups to study the Jewish Tora, the Muslim Qur’an, Buddhist Sutras and so on. Kyoshu-sama’s guidance is making it much easier for me to do my job, trying to spread Johrei and Meishu-sama’s teachings in an extremely conservative Christian Orthodox country. This is something which I have also always thought, the need to work together with Christianity and not fight it.

For many years, I have had a painting in my living room of Jesus Christ blessing children. I also have a Bible next to Meishu-sama’s teachings on my bookshelf. Moreover, I have an image of the Virgin Mary in my altar room as well. Even so, no member here in Greece thinks that I am trying to Christianize our church. How foolish are those who prefer not to change, who do not want to leave their comfort zone and who do not want to continually grow, as Meishu-sama teaches us. People who do not want to grow because, in truth, they are too lazy to study and to try to understand the true wish of Kyoshu-sama.

Kyoshu-sama pulled us out of the hibernation we had fallen into, out of the routine which we were accustomed to and did not want to leave since what we were doing up to now was good and convenient.

We were completely out of focus, out of touch from our real mission, which is to prepare heaven on earth together with all other religions. If one day, Meishu-sama becomes known as the savior of humanity, this will occur naturally without any imposition. I truly believe this will happen not so far in the future. However, to put Meishu-sama on a pedestal and, consequently, all of us who represent him, then thinking that people do not have the level of understanding to comprehend our faith will only lead us into isolation, making us a minority group, arrogant and with a superiority complex.

Let us please wake up. Today, globally speaking and when compared to other churches, our church is nothing more than a small religious group, a sect, as considered in various countries. For how long will we remain limited and secluded? Until when will we keep disrupting Meishu-sama’s work? Could it be that Kyoshu-sama only wishes for what Meishu-sama always wished for, to create a world church? This is the mission of World Church of Messiah – the name given originally by Meishu-sama to our church when he was still in this physical world. Kyoshu-sama is not making up anything new. He is only bringing to light all that had been camouflaged, be it for fear or the interest of some leaders in our church throughout the decades. Meishu-sama wrote dozens of teachings about Jesus Christ that the church never published. Kyoshu-sama is revealing to the world Meishu-sama’s true feelings.

I am extremely happy to be able to participate in this new beginning of our faith, where, without fear, we will finally reveal to all humanity all of Meishu-sama’s teachings.

Maybe I was lucky to have been able to be present in Japan during all of this turmoil both in 2017 when all of this came to light and in 2018 where I was able to speak directly to Kyoshu-sama for many hours.

As a man of faith, I am following my heart and my instinct in this way. Seeing those involved in both parts of this story, face to face, I was able to make my decision based on the makoto that I felt. In Osaka, at the service with Kyoshu-sama, the expression on the members’ faces left me with no room for doubt. It was a privilege to be with Kyoshu-sama and his family. There were divine moments that I had never experienced before in our church, not even during the many occasions where I had the opportunity to meet with other great leaders.

Though physically apart, I am very grateful to be able to observe all of the changes and updates that are being brought to our organization from Kyoshu-sama’s guidance.

I believe that our new organizational structure which unites us as one body will bring tremendous change to the spiritual realm of our church. Finally, God is being brought forth to precede human beings.

I am very grateful and happy to know that God will not leave anyone out, that all are being resurrected and saved.

Despite being a small church in size and number of active members who really believe in the name of Messiah, which is one with Meishu-sama, I am excited to be able to continue my mission in Greece and spread the gospel of heaven that is embedded in this word.

I am happy to be part of a religion where all members, from the youngest to the oldest, know that they have the same divine particle and that the word Messiah vibrates within everyone making us return to heaven, which has always existed within each one of us since our creation by our only Father, where we are all a church of God!

May the Lord God use us always as His churches.