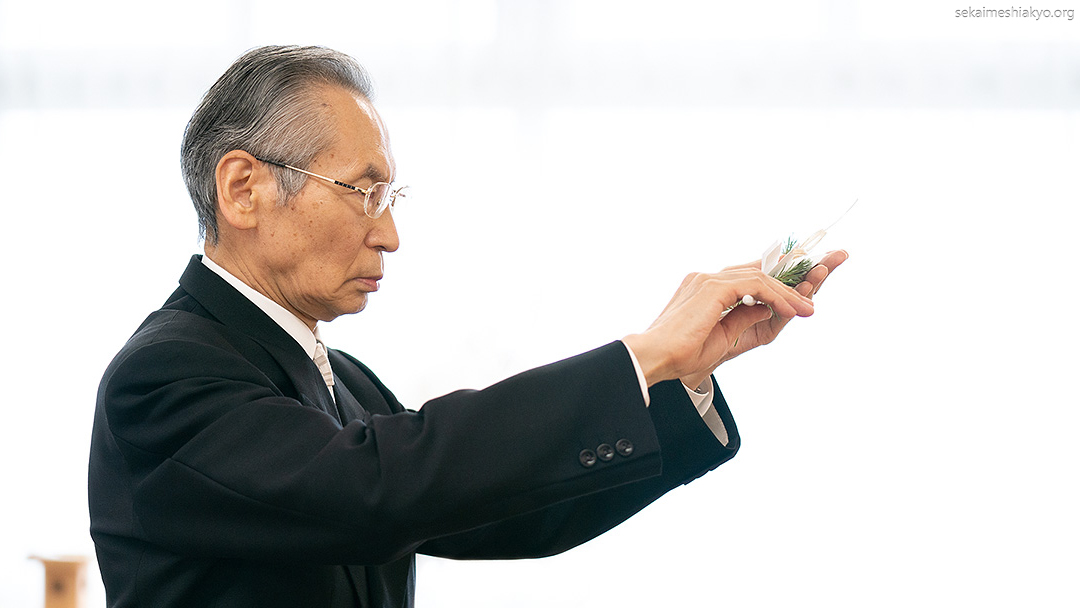 On July 1, the July Monthly Service took place at the World Church of Messiah headquarters altar room, where Kyoshu-sama, Master of Rituals & Ceremonies, officiated this service for the first time. Kyoshu-sama’s successor, Masaaki-sama, delivered the greeting.

On this day, Kyoshu-sama’s wife, Mayumi-okusama, was present. Along with executive directors and regional directors including President (of SKK) Nakadomari and President Narii, a limited number of members from the Shinsei Region also attended the service.

The service began and Kyoshu-sama entered the altar. He read aloud the opening prayer to God. After he offered the pine branch (symbol of appreciation), everyone prayed the Amatsu Norito under his lead. Continuing next to the ancestral shrine, Kyoshu-sama read aloud the opening prayer for the Monthly Ancestor Service. After he offered the pine branch, everyone prayed the Zengen Sanji. Then, a prayer was said at the new deceased ancestral shrine, also.

Next, everyone sang Meishu-sama’s hymns to God. After hearing the Sacred Word, “The battle between good and evil,” everyone received Johrei from Kyoshu-sama. Following the gratitude report from a member of the Eastern Japan Region, Masaaki-sama stood to deliver his greeting. In the opening, Masaaki-sama asked everyone, “For us followers of Meishu-sama, what is happiness?” “Why were we born and where are we headed?” On that subject, he delivered a greeting infused with passion. At the end of the greeting, the service came to a close.

With this time’s monthly service being the first that Kyoshu-sama served as officiant, the manner of the service was renewed. The prayer hall was enwrapped in an atmosphere that was like a revived scene where God, the ancestors and us exist not as separate existences, but as one in the heaven of beginning, in God’s home.

From Kyoshu-sama’s expression, from each and every one of his movements and from his whole body, one could see that he was filled with the strictness and spirit of serving God and the truth of Meishu-sama with his entire body and soul. Through this posture, attendees of the service were able to reach a deep conviction that he was boldly guiding members all over the world. As such, it was a historic service for the church.