Memorial Service for Takae Okada: A life led one heart with Kyoshu-sama 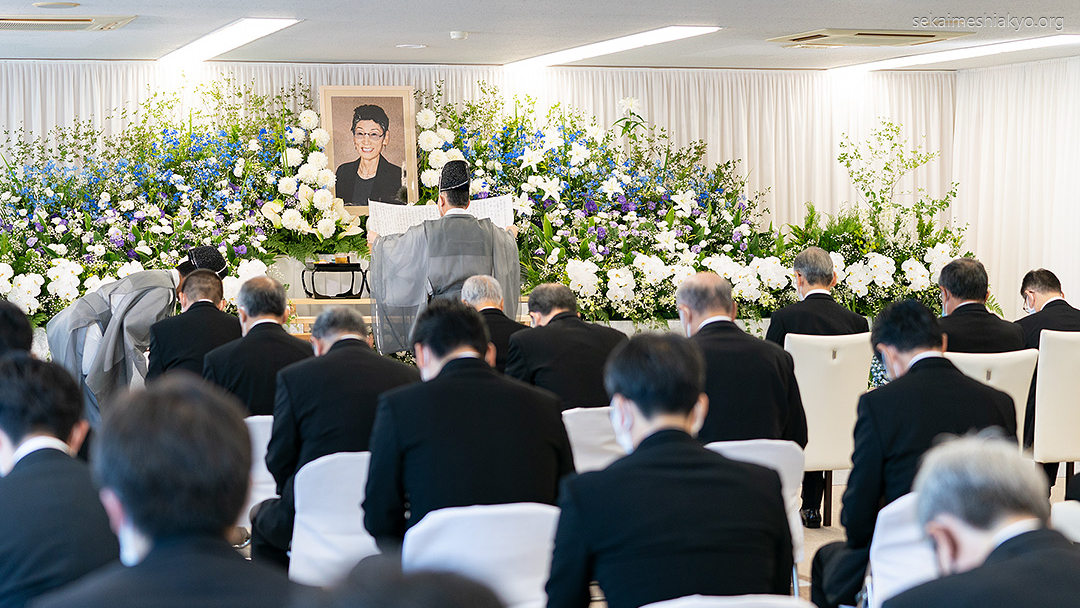 On August 30, the memorial service for Mrs. Takae Okada, wife of Meishu-sama’s fourth son, the late Kunihiro Okada, and member of Sekai Kyusei Kyo’s Official Spiritual Lineage, solemnly took place at the World Church of Messiah headquarters. With President Nakadomari (of SKK) serving as chairman of the service, Kyoshu-sama, as well surviving family members and members of the Official Spiritual Lineage, Mayumi-okusama and Masaaki-sama, attended. From the church, members of the board of executive directors, regional directors and headquarters staff were in attendance, paying their respects and remembering her life.

Takae-sama was fond of stars, and on that day for her altar, her zodiac sign, Sagittarius, was expressed by Casablanca lilies. Reminiscent of a starry sky, other arranged flowers included lily, dahlia, lisianthus and baby’s breath.

The service began at 1 pm. Wearing gray garments of traditional formal Japanese fashion, the officiants entered the altar. First, the Shinubi (words of remembrance) was offered. Kyoshu-sama, and then President Nakadomari (Chairman of the Service), President Narii, bereaved family, Mayumi-okusama, Masaaki-sama and representing the attendees, Vice President Shirasawa, offered a pine branch (symbol of appreciation). After everyone prayed the Zengen Sanji, elegies composed by Kyoshu-sama were offered aloud.

Next, President Nakadomari stood to express words of appreciation to the attendees and shared what Takae-sama clearly said with an iron will at this time’s church purification: “From here on, too, I would like to go forward together with Kyoshu-sama. And I earnestly wish for the Official Spiritual Lineage of Sekai Kyusei Kyo to be under the legitimate president who has received authorization from Kyoshu-sama.” He said his heart was warmed with gratitude by this and closed with the following words, “Let us overcome this sadness and fully carrying on Mrs. Takae Okada’s will. In the name of Messiah, which is one with Meishu-sama, I would like to go forward always one heart with Kyoshu-sama, who reveals to us the will of Meishu-sama in this material world.”

Lastly, all the attendees paid a floral tribute, solemnly bringing the service to an end.

In that evening’s sunset, the sky turned into a bright blue, a phenomenon known as the “blue hour.” Along with the rising of the moon, a wondrous landscape was seen befitting for the remembrance of Takae-sama.

Takae-sama was born on December 21, 1938, as the second daughter of Rev. Sakae Iwamatsu, who bore heavy responsibility for the church for many years as a disciple of Meishu-sama. She married Mr. Kunihiro Okada on March 13, 1960. In February of 1973, she assumed the position of General Director of the Sangetsu School of Flower Arrangement (Ikebana). Through the activity of Ikebana, she made efforts for the expansion of the church.