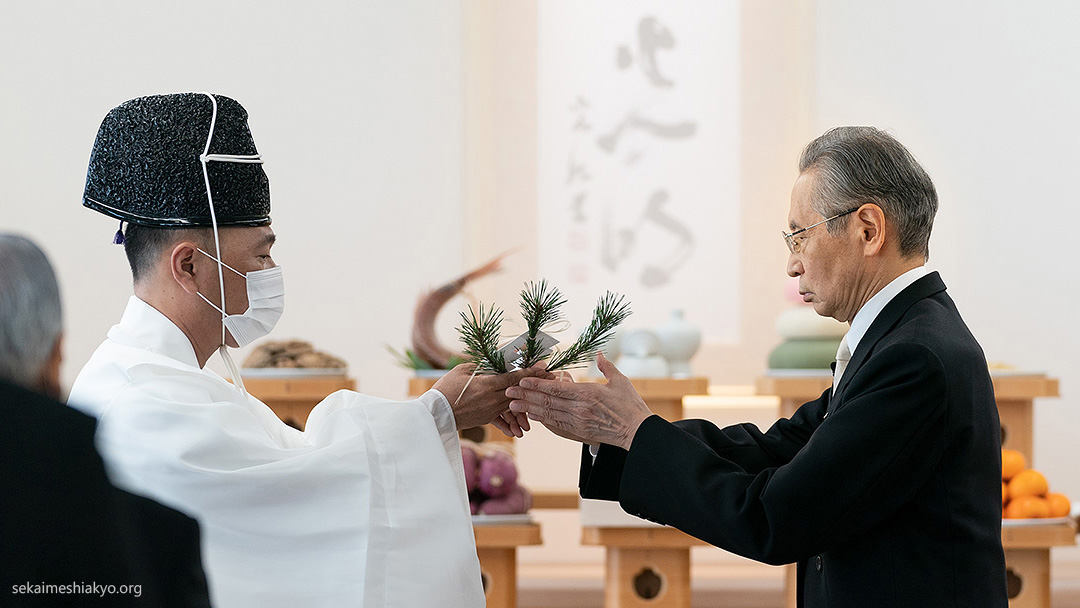 Under the presence of Kyoshu-sama, Master of Rituals and Ceremonies, the World Church of Messiah Grand Autumn Service took place on October 1 in the headquarters altar room. Mayumi-okusama and Masaaki-sama, Kyoshu-sama’s successor, were also present, and gathering were members from the Chugoku, Shikoku and Kyushu Regions.

The service began at 11:30. Kyoshu-sama entered the altar and read aloud the Opening Prayer to God. After offering the pine branch (symbol of appreciation), he read Words of Prayer. Then everyone prayed the Amatsu Norito together.

Next, a prayer was given to the ancestors and newly deceased spirits in front of the ancestral shrine.

Afterwards, everyone sang Meishu-sama’s hymns to God and the Sacred Word “Words in my stead” was heard. Next, everyone received Johrei from Kyoshu-sama.

After a greeting from President Narii, Kyoshu-sama took the podium. With a grave, intense expression on his face filled with truth, he gave us guidance on how we have certainly received the atoning blood of Jesus Christ, awakened to the true meaning of Meishu-sama’s realization of the Transition from Night to Day, and received the good news of the arrival of the era in which we serve God with our sonen.

In a solemn atmosphere, the service came to a close. The attendees left the headquarters engraving deep into their hearts Kyoshu-sama’s message that continues to invite us to a bright, new era promised by God.