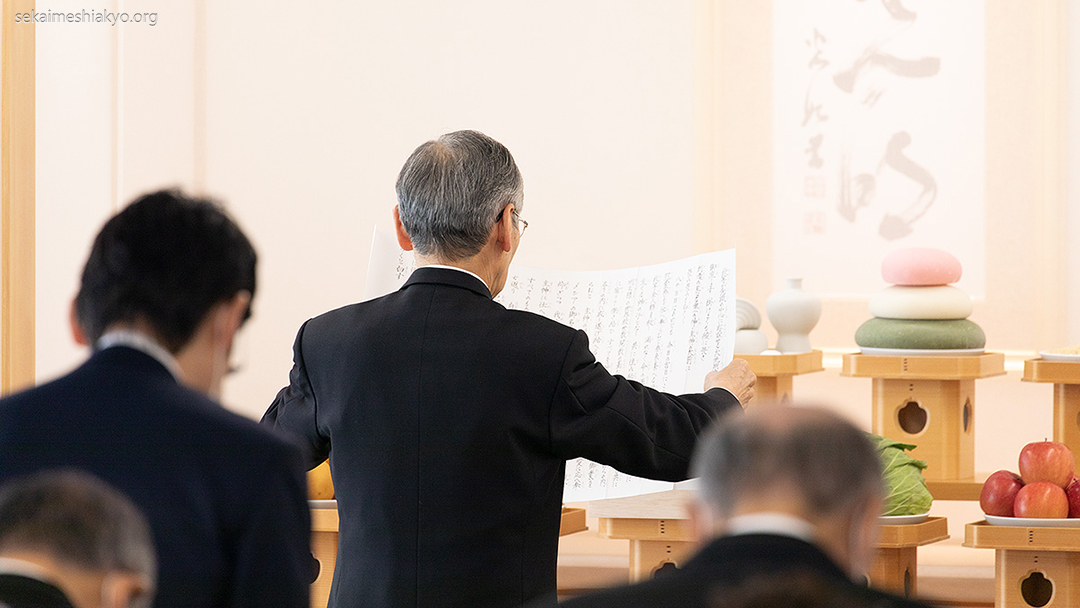 Under the presence of Kyoshu-sama, Master of Rituals and Ceremonies, the November Monthly Service took place in the World Church of Messiah Headquarters altar room on November 1. With Mayumi-okusama and Masaaki-sama, Kyoshu-sama’s successor, in attendance, members from the Eastern Japan Region gathered for the service.

The service began at 11:30 a.m. Kyoshu-sama entered the altar and read aloud the opening prayer to God. After presenting the pine branch (symbol of appreciation), he offered Words of Prayer by himself. Next, everyone prayed the Amatsu Norito.

Continuing on, a prayer was offered to the ancestors and newly deceased spirits in front of the ancestral shrine. Then, everyone sang Meishu-sama’s hymns to God. After hearing excerpts from the Sacred Word of Meishu-sama regarding the Bible, everyone received Johrei from Kyoshu-sama.

After Kyoshu-sama exited the altar, Masaaki-sama stood to deliver a greeting. In his greeting entitled “A promised future,” he gave guidance with a passionate heart including how Meishu-sama’s God is the Heavenly Father and the One whom we have faith in; how Meishu-sama said the lyrics to Handel’s Messiah were good and wanted members to sing Messiah; how in Messiah, there is the “Amen” chorus, and to have dismissive thoughts toward the word “amen” in itself is out of tune with the will of Meishu-sama, who says that the lyrics are good. He also stated with conviction for us to turn toward the goal Meishu-sama revealed to us, that is, to be born anew as a child of God and toward “a promised future,” in which we serve God for eternity in jubilation with Meishu-sama, Jesus and many other magnificent figures—it is this “race of life” of which no one drops out, that we are now truly running.

Those attending the service departed the headquarters turning toward a bright future filled with hope and with thoughts of running the “race of life” expressed by Masaaki-sama.