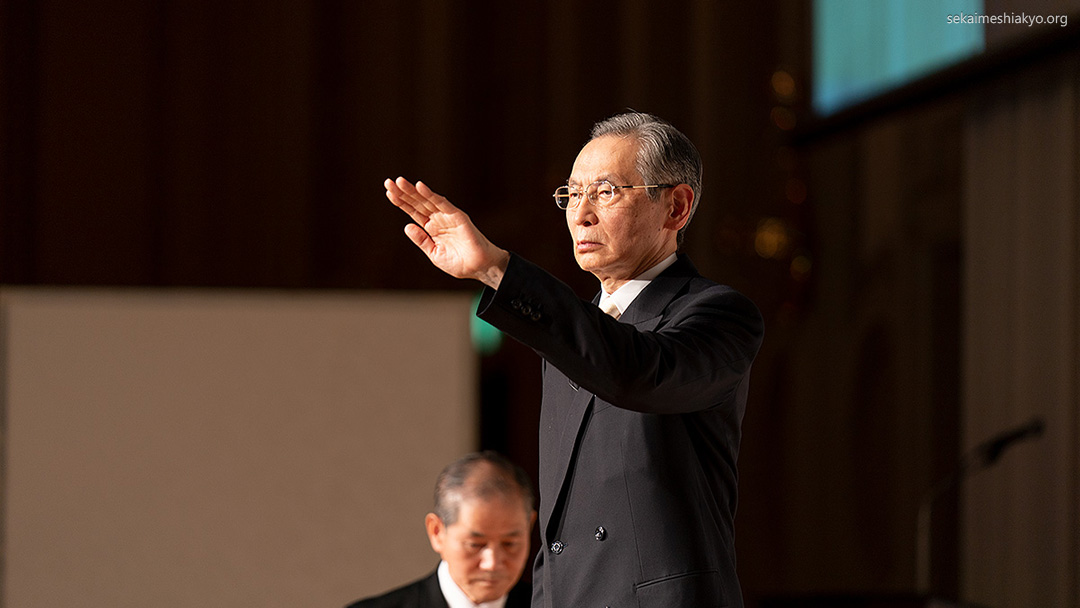 On December 20, Meishu-sama’s Birthday Service was held close his birthplace at the Grand Nikko Tokyo Daiba under the presence of Kyoshu-sama, Master of Rituals and Ceremonies.

To hold this day’s service, safety measures were taken, upon the spread of Covid-19 throughout the country—limits were placed on numbers of attendees from each region, attendees were asked to not to let out their voices during the service and suchlike. The Opening Prayer, Words of Prayer and the Amatsu Norito were all offered by Kyoshu-sama alone, while Meishu-sama’s hymns were offered by the Assisting Officiant alone.

On this day, President Narii said that all executive directors, regional directors, missionary area chiefs, lead ministers of churches and staff members unanimously wanted to offer the Lord’s Prayer aloud at Headquarters, churches and members’ households for services and morning and evening prayers beginning from the 2021 New Year Service and requested for approval from Kyoshu-sama. He announced that we received Kyoshu-sama’s approval.

After the video presentation “Reading of ‘The life of faith I have walked,’” Masaaki-sama took the podium. With passion, he gave guidance saying that embedded in the Lord’s Prayer that Church of Messiah members offer, is the grave spirit of awakening Christians and bringing salvation to humanity.

Then, Kyoshu-sama stood to deliver his message. In it, he announced he determined the new Goshinmei, which are to be offered to God and the ancestors. This is an extremely great advancement in divine work. Along with that, he announced the “World Church of Messiah Lord’s Prayer” that would be newly offered to God from next year’s New Year Service.

For the finale of the service was the performance of “Amazing Grace,” a Japanese version translated by Kyoshu-sama and prepared by him especially for that day. Presented for the first time as a solo performance by a member, it drew deep emotion.

On this day, in a service that made its mark in Church history, members left the venue while hearts quivering for the rising curtain on new divine work starting in 2021.