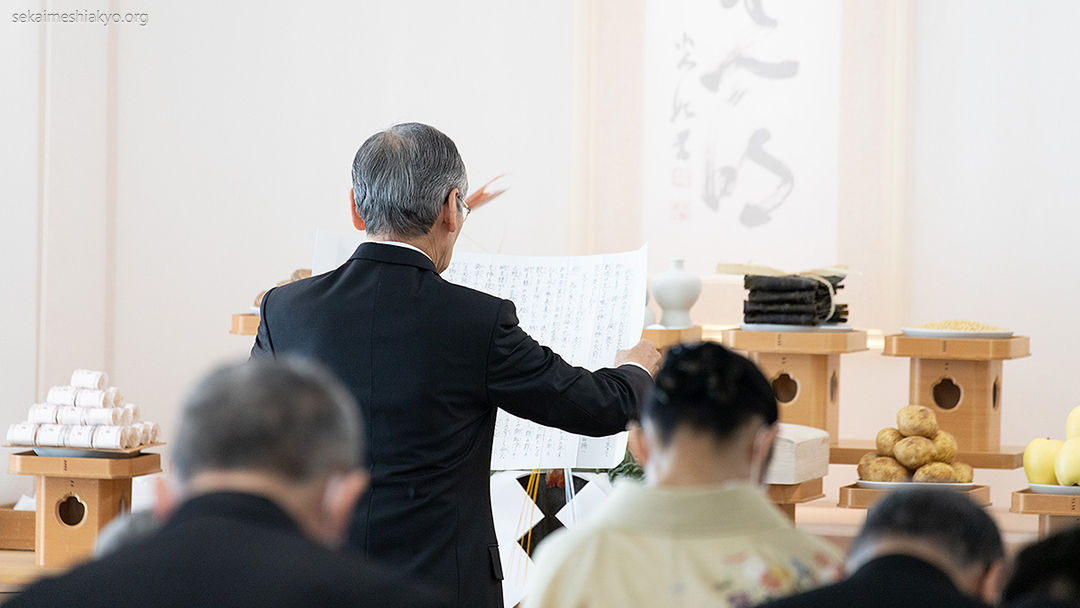 Under the presence of Kyoshu-sama, the New Year Service was held in the Headquarters altar room on January 1, 2021. With Mayumi-okusama, wearing a traditional Japanese kimono, and Masaaki-sama, Kyoshu-sama’s successor, in attendance, members from the Shinsei Region gathered for the service.

Starting this year, the liturgical rituals and ceremonies of each country across the world were standardized. On this day of the New Year Service, it was the first service to apply this new form.

At 11:30 a.m., the service began with the entrance of Kyoshu-sama into the altar room. He offered the Opening Prayer to God and then the pine branch (symbol of appreciation). With Kyoshu-sama leading, everyone prayed the new divine name with a refreshed feeling, continued on with Words of Prayer and then offered, for the first time, World Church of Messiah Lord’s Prayer.

Also in front of the ancestral shrine, everyone prayed the new divine name. Next, in front of God, the assisting officiant offered the hymns of Meishu-sama. After the master of ceremonies read aloud the Sacred Word “My ambition,” everyone received Johrei from Kyoshu-sama.

After a greeting from President Narii, Masaaki-sama went to the podium. With conviction, he said, “If Meishu-sama says that Handel made the ‘Hallelujah’ chorus for World Church of Messiah, then I would like to say that Jesus prepared the Lord’s Prayer for Church of Messiah to guide Christians to the true path.”

And finally, Kyoshu-sama stood to deliver his message. He clearly expressed that God uses our hearts and is accomplishing His creative work of great harmony within each and every one of us and that regardless of who we are, we are taking part in God’s divine work of creation.

The attendees of the service received Kyoshu-sama’s message and Masaaki-sama’s greeting and left the headquarters engraving into their hearts that they will serve with all their heart and soul in the divine work of World Church of Messiah that will begin full swing from this year forth.