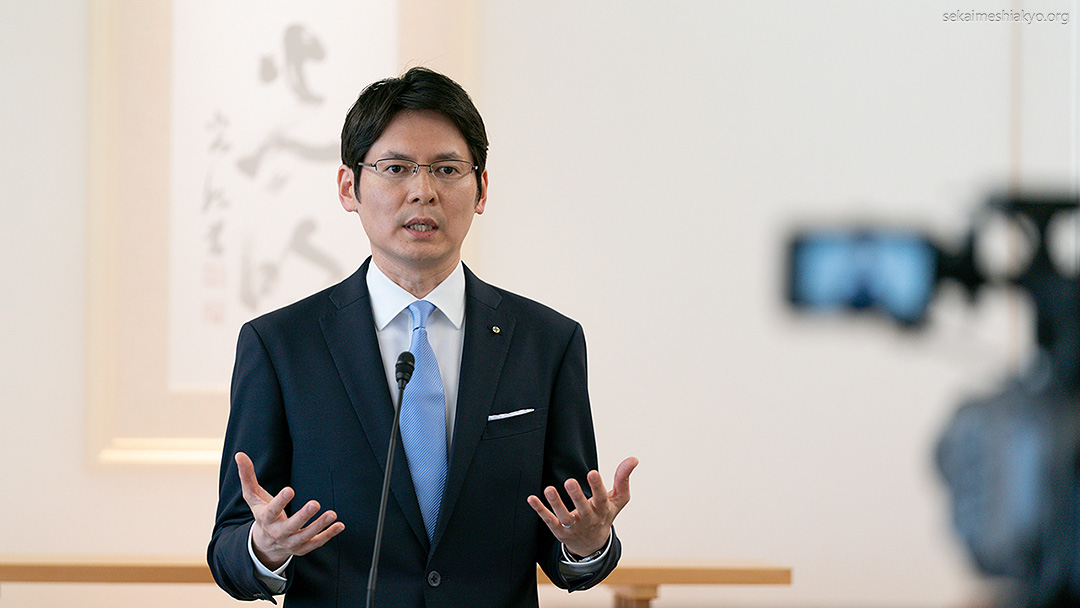 PDF file: “Judge not Be grateful” – Masaaki-sama’s Message No. 5

Four years ago, in September 2017, we came to know that Kyoshu-sama and his wife had been secretly followed, filmed and photographed during their private time.

And we came to know that the people who ordered and committed this outrageous act were linked to those who now claim to be the executive directors of Sekai Kyusei Kyo in Japan.

That is, it was those claiming to be the followers of Meishu-sama who ordered and committed this unthinkable act.

Now, we have to think: Meishu-sama is someone who taught us to love others, to construct a paradise on earth where all people live in happiness without fear, and to establish the Crystal World where there is no secrecy or darkness, where the good prosper and where justice prevails.

If you claim to be or want to be a follower of Meishu-sama, how can you approve or tolerate this kind of shameful act?

The very fact of approving and tolerating, let alone committing this kind of act means that you have given up being a follower of Meishu-sama who taught us to love others and create a world that is beautiful and just.

The very fact of approving and tolerating this kind of act goes against everything Meishu-sama taught us, everything he stood up for.

If we approve of secretly following and filming someone, how can we ever create a paradise on earth?

What kind of a paradise on earth is it, if this kind of cowardly act is being carried out and tolerated?

At the time when I came to know what happened, I thought to myself: “Well, no one is going to tolerate this kind of act nor approve of those who did it, because how can a follower of Meishu-sama tolerate this?”

But to my surprise, many of those around the world who claimed to be the followers of Meishu-sama tolerated this act and approved of those who now call themselves the executive directors of Sekai Kyusei Kyo. In Brazil, Europe, Africa, the United States—many approve of the current executive directors of Sekai Kyusei Kyo in Japan, meaning, they approve of the cowardly act of secretly following and filming someone during their private time.

Some say, “No, the problem was with Kyoshu-sama because he was teaching something that was against the teachings of Meishu-sama.”

Okay. What Kyoshu-sama has been teaching us are these: That we have to be born anew as Messiahs just like Meishu-sama. That even though the physical act of Johrei is important, what counts more is to surrender our thoughts and feelings to God through our sonen. And that we have to work together with Christians to bring salvation to the whole world.

Don’t you know that Meishu-sama, our most precious model, said that he was born anew as the Messiah? That Johrei is not so important anymore and that we have entered the world of sonen? That he would do his utmost to work in concert with Christianity to bring salvation to the whole world?

Those who wanted to expel Kyoshu-sama couldn’t do this, because how can trying to follow in the footsteps of Meishu-sama and be born anew as Messiahs go against the teachings of Meishu-sama? We are followers of Meishu-sama! And that is why they needed to secretly follow and film Kyoshu-sama and his wife so that they could find something, some information, that could be used against him.

But meeting with a Christian friend? Studying the Bible? Are they using these as the reasons to attack Kyoshu-sama? Really?

So, the fact of committing this cowardly act is the very proof that they couldn’t expel Kyoshu-sama through accusing him of going against the teachings of Meishu-sama. If not, why did they need to secretly follow him?

To those who still approve of that cowardly act and of the ousting of Kyoshu-sama, I tell you, today, “Wake up!” “Wake up and repent!” Why did you enter this faith in the first place? Didn’t you all want to throw off your old clothes that were covered in sin and impurity, and become someone who is worthy to wear the spiritual clothes that Meishu-sama has prepared for you? Never underestimate God who does absolutely everything and anything to correct everyone’s hearts and make everyone holy.

Now, yes, to secretly follow and film someone is cowardly. Yes, to approve of those who commit this kind of act is also cowardly and shameful.

Let’s think: why did they commit or approve this kind of act and want Kyoshu-sama out?

Well, because they wanted to do things their way, right?

They may want to say, “No, we wanted to protect the divine work of Meishu-sama!”

But, I think everyone knows that in Sekai Kyusei Kyo or Igreja Messiânica Mundial, the one who inherits the sacred work of Meishu-sama has always been Kyoshu-sama. We can’t just suddenly do away with Kyoshu-sama, can we? What are we going to do with Nidai-sama and Sandai-sama? Are we going to deny the whole history of our Church? Don’t you remember how Reverend Watanabe told us that those who didn’t want to follow Kyoshu-sama and wanted to do things their way left Kyoshu-sama, and they themselves became “Kyoshu-sama” believing that they represented Meishu-sama on earth? Don’t you know that Nidai-sama said that Kyoshu is the one who receives Meishu-sama’s will on earth? Don’t you know that Sandai-sama, too, fought so hard to protect the Seat of Kyoshu from those who wanted to do things their way?

So, yes, they committed and approved this act, because they wanted to do things their way and not the way shown by Kyoshu-sama who represents Meishu-sama on this earth.

Haven’t we always wanted to do things our own way, instead of God’s?

Even though we know what God wants, haven’t we always justified our acts, saying we have these reasons and that, and sometimes even using God as an excuse to do things the way we want?

Isn’t it us who actually need to wake up and repent of our posture toward God?

How profound the will of God is!

So do not judge. Do not judge and think we are better.

And actually, it is not only not judging. I say we need to be grateful to them for making us realize our unforgivable posture toward God. Or rather, let us be grateful to God for using them in that way. I believe it is only through truly being grateful to God for using them that those who committed and approved of and are still approving of that shameful act can really fulfill the role God assigned to them, that is, to wake us up.

God, allow us to put on the spiritual clothes You prepared for us, and may Your glorious light be with all.