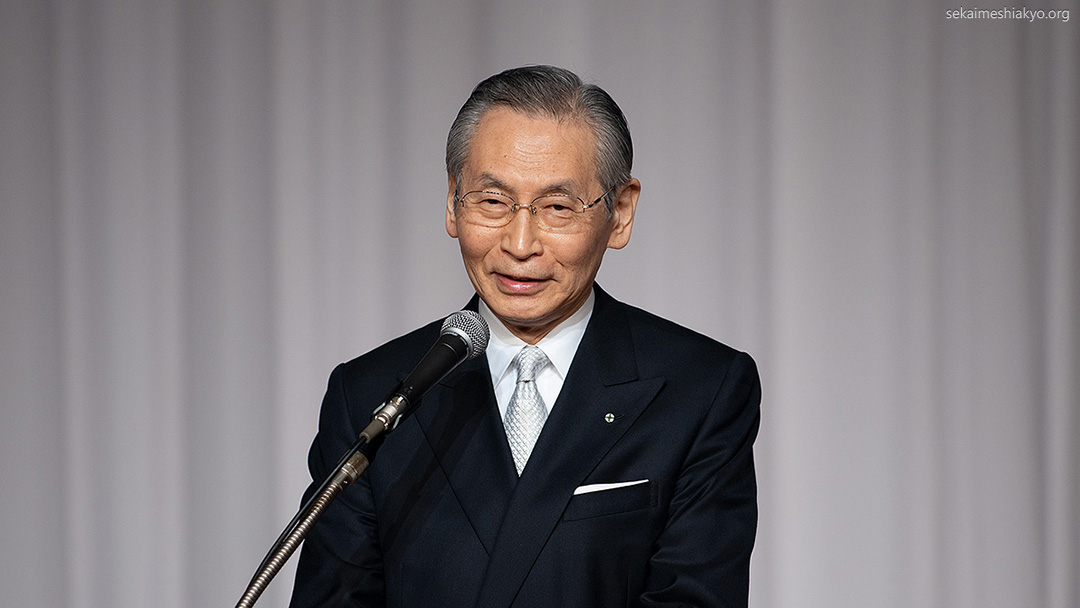 On February 4, the Beginning of Spring (Risshun) Service took place under the presence of Kyoshu-sama at the Hotel Okura Kobe, marking the one-year anniversary of the resurrection of World Church of Messiah. Mayumi-okusama and Masaaki-sama, Kyoshu-sama’s successor, were present, along with a limited number of people in attendance who did not let out their voices during the service, following the safety measures and guidelines for the prevention of Covid-19 spread.

At 1 p.m., the service began with the entrance of Kyoshu-sama into the altar area. He offered the Opening Prayer to God followed by the chanting of the divine name, then the offering of Words of Prayer and World Church of Messiah Lord’s Prayer.

Continuing on, Meishu-sama’s hymns were offered by the Assistant Officiant. After the master of ceremonies read aloud the Sacred Word, “Religion should be universal,” everyone received Johrei from Kyoshu-sama.

Next, President Narii gave a greeting and announced that the Japan Patent Office approved the trademark registration for the symbol that was used when Meishu-sama first established World Church of Messiah and that we have received the approval of Kyoshu-sama to use this symbol as our new church symbol.

After the video presentation, Masaaki-sama stood to deliver his greeting. At the very start of his talk, he quoted the Sacred Word “Gratitude gives birth to gratitude; complaints attract more complaints—this is truth indeed. For a grateful heart reaches God and a complaining one reaches the Devil.” Based on this theme, he gave guidance filled with conviction, passion and truth.

Next, Kyoshu-sama stood to deliver his message. Reminiscent of his grandfather Meishu-sama, who was strict but dignified, he boldly said, “Faith, in short, is the working of sonen. So let us offer to God the faith of believing in things unseen—the kind of faith Meishu-sama held—and let us respond to the will of Meishu-sama who, just before his ascension, taught us that ‘From now on, we enter the world of sonen.’”

At the end, a vocal solo of “Amazing Grace,” the Japanese version translated by Kyoshu-sama, was performed by a member, closing the service in an atmosphere of great emotion.