Treasuring the voice of God we heard today – May Monthly Service 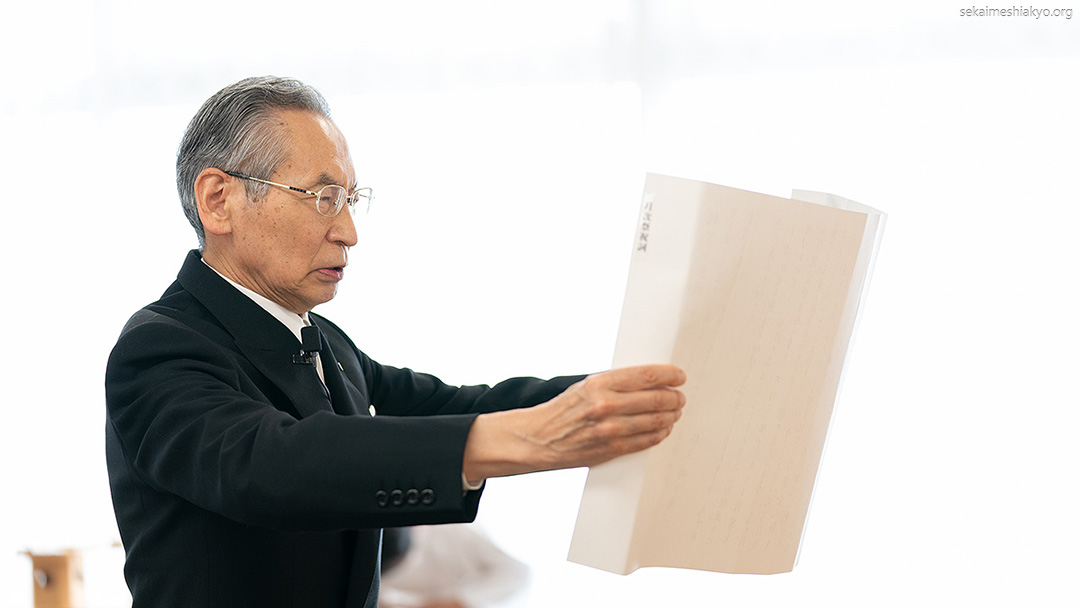 On May 1, the May Monthly Service took place in the headquarters altar room under the presence of Kyoshu-sama, Master of Rituals and Ceremonies. Also, the Fourth Year Anniversary Memorial Service for the soul of Miya Yoshioka, Meishu-sama’s second daughter, took place in combination with the Monthly Ancestor Service.

The service began at 11:30 a.m. with Kyoshu-sama entering the altar area. He offered the Opening Prayer to God and then the pine branch (symbol of appreciation). Next, he chanted the divine name and offered Words of Prayer and World Church of Messiah Lord’s Prayer.

Moving to the ancestral shrine and after holding the Monthly Ancestor Service, the assistant officiant sang Meishu-sama’s hymns to God. Everyone heard the Sacred Word “Miroku Grand Service” and then received Johrei from Kyoshu-sama.

After a brief interval, Masaaki-sama, Kyoshu-sama’s successor, stood to deliver his greeting. In it, he made mention of a Sacred Word that said, “A religion that engages in conflict is no longer entitled to be called people  of  faith” and explained that we must recognize that Sekai Kyusei Kyo’s path of conflict is actually a reflection of ourselves. He gave guidance saying that we who have opposed and rebelled against God and Meishu-sama must realize our sin and true nature—with reverence toward God, we must repent.

He boldly continued, saying that even though we are sinful, we have actually already heard God’s voice filled with His great love saying, “I love you eternally.” And even today, we are hearing His voice saying this. Masaaki-sama then called on everyone, “Let us go forward living our lives together in God’s love.”

The day of the service came with incessant downpour, but when Masaaki-sama’s greeting ended, the clouds vanished, and the sky suddenly transformed into clear weather. It was as if the joy we felt in realizing God’s voice reflected onto the sky. Even as a reporter, I could not help but wish to live in God’s love.