Now is the time to inherit – Paradise on Earth Service 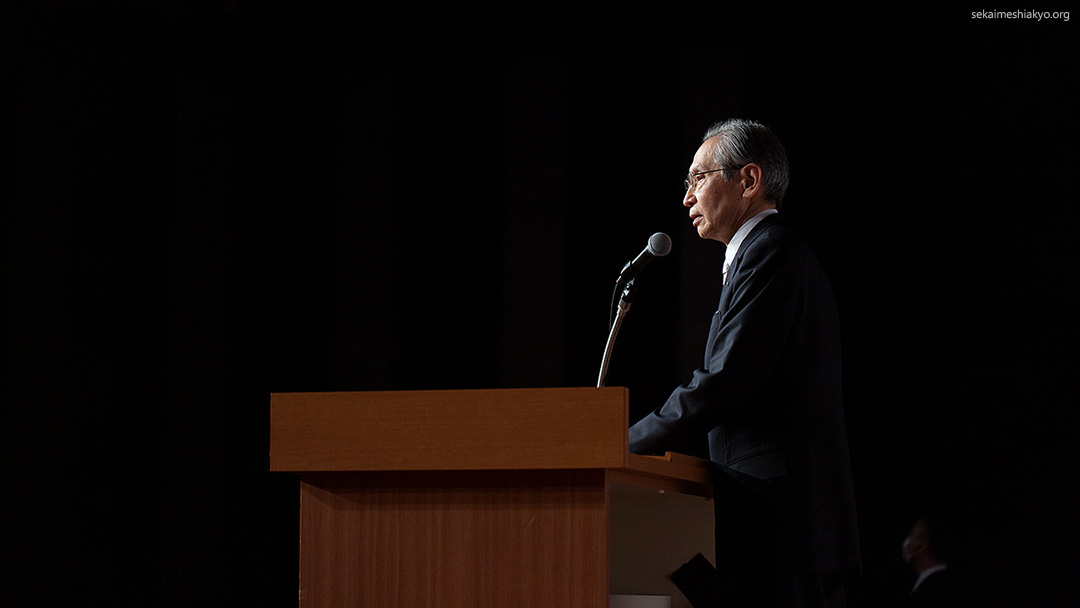 90 years has passed since Meishu-sama received the divine revelation of the Transition from Night to Day. Marking that day, the Paradise on Earth Service worthy of commemoration took place on June 12 at the Hotel Okura Kobe under the presence of Kyoshu-sama.

During President Narii’s greeting, he introduced a short video highlighting the first class of trainees under SEMES in Angola. Next, the video “The Time to Inherit” was presented (https://bit.ly/3ho9bJK), showing us why Meishu-sama entrusted his position to Nidai-sama and why, through today, the seat of Kyoshu-sama has been passed down—that is because Meishu-sama wanted for us to inherit God’s true will.

In Masaaki-sama’s greeting, he gave guidance saying with passion that even though we do not have an actual sense of what Meishu-sama meant when he admonished us to repent, we must respond to him now. And that it is not impossible to attain eternal life and live in a paradise on earth together with all humanity if we become one with Kyoshu-sama.

Following Masaaki-sama, Kyoshu-sama stood to deliver his message. He pointed out the importance of receiving now the light of the Transition from Night to Day, the light that brought forgiveness to all humanity two thousand years ago. And with bold words, he gave guidance saying that for us to return to heaven carrying with us everything on earth, to become one with heaven, and for all humanity to be born anew as Messiahs, is the true picture of a paradise on earth.

At the end, after “You Raise Me Up” with lyrics translated by Masaaki-sama was sung by a member, an original World Church of Messiah song with lyrics written by Masaaki-sama entitled “For I Now Know Your Love” was presented for the first time. With the essence of faith condensed into lyrics and a beautiful melody, the venue was enveloped in great emotion. Even as a reporter myself, I could not help the trembling in my heart.