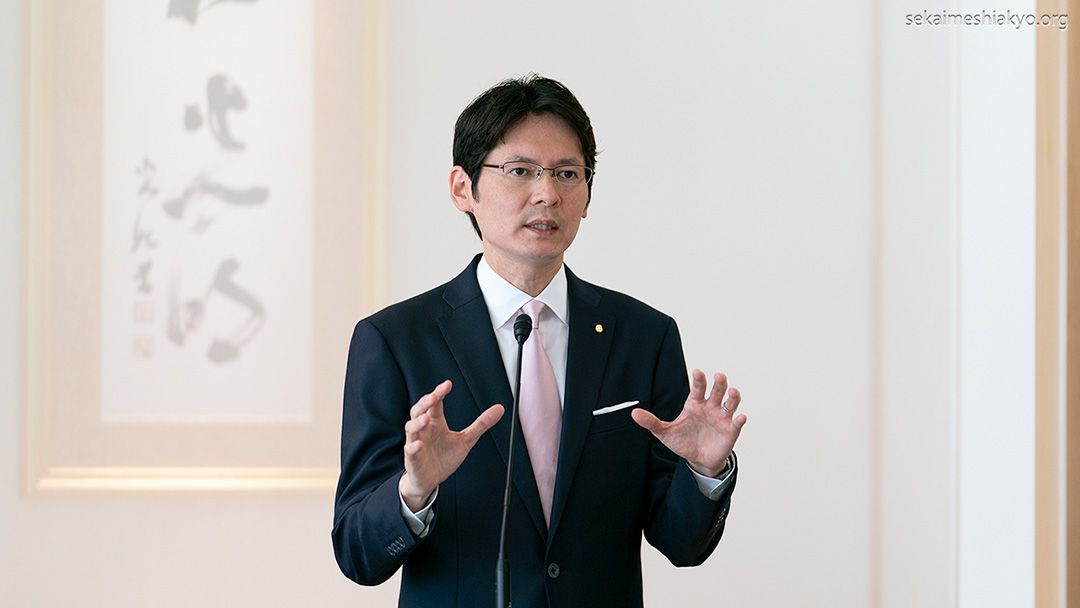 PDF file: “Be naked before God” – Masaaki-sama’s Message No. 8

Meishu-sama announced the arrival of a new world.

With a new world comes a new faith.

Then, the question we should be asking ourselves is this: what is the old faith for Meishu-sama?

This is what Meishu-sama says:

People in the religious world often say that “human beings must have such and such sentiments” or “you must put such and such into practice.” To try to improve the human mind through these teachings, however, is actually something below religion. They are within the sphere of morality.

When we say “religion,” it refers to the teachings of a founder. They are along the lines of “human beings should do good,” “you should not do evil,” “you should respect your parents,” “you should take good care of your possessions.” These, however, are actually just moral teachings, and to hold fast to these is not enough.

Haven’t we, for a long time, believed that all these things were what Meishu-sama wanted us to do? That they were what he taught us?

But Meishu-sama is saying, clearly, that all these things are simply moral teachings and not what he really wants to teach us.

Human beings have to simply acknowledge the existence of God and know that He sees through everything. Anything else is a trivial matter; it is unnecessary. Everyone makes religious teachings so troublesome by saying things like “one must do this” or “one must practice this.” But the single, most crucial point is this: God exists.

This was what Meishu-sama said.

But what have we been doing? “Practice, practice.” “Be grateful, be grateful.” This is all we’ve been saying until today, isn’t it?

But why were we not able to hear what Meishu-sama was saying?

Why have we been ignoring these words of Meishu-sama even though they’ve been right in front of our eyes all this time?

But what is the point of proving to God, Meishu-sama and the people around us how good we are or how good we can be?

Meishu-sama is saying that we just need to acknowledge the existence of God and know that God sees through everything.

God knows, everybody. He knows.

He knows what we feel and think deep down in our hearts.

He knows all our ugly thoughts—thoughts that we want to hide from others and from God.

But nothing can be hidden from God. His light has already reached the deepest part of our hearts, and every hidden thing, every secret is known to God.

So, give up. Be naked before God. We don’t need to pretend anymore.

Why are we here in the first place?

Our mission is to save those who are suffering, isn’t it? That’s what Meishu-sama is telling us, isn’t it?

So who are those who are suffering?

They are those who are within us and who say to us, “Instead of doing good deeds, I committed something terrible!” Or “Instead of loving others, I did something unforgivable out of hatred!” Or “I am helpless! I can’t do good deeds. I can’t practice altruistic love. I don’t have the feeling of gratitude!”

It is these feelings within us to which we need to bring salvation.

But what are we doing? Instead of admitting that these feelings, these postures, exist within us, we are using our time—every day, every moment—trying to be a better person, trying to get rid of and ignore those ugly voices and those helpless postures that exist within us.

We are using our time for our own sake, for our own improvement instead of for the sake of salvation, for those who are suffering within us. How mistaken we have been!

Meishu-sama taught us that in order to save others into heaven, we need to climb up to heaven before anything else. But instead of doing that, we are saying things like, “I need to do these practices so I can become a resident of heaven.” Or “I need to do good deeds to be accepted into heaven.” Or “At the very least, we should try to do good deeds.”

Okay, trying is good, but if we just keep on trying, when are we ever going to admit that we are sinners who need to repent and return to heaven? By saying that “we need to try our best,” we are simply postponing the time to receive God’s forgiveness and return to heaven, something Meishu-sama taught us that we must do before anything else.

Or among any of you, is there someone who can say, “I am without any sin,” “I have always loved every single person equally, without any discrimination,” “I’ve never failed to do good deeds,” “I’m always full of gratitude,” “I’ve never said or thought something bad about other people”? Can any of you actually say these things? I don’t think anyone can, yet we keep saying we need to try to do these things. We keep saying that we need to aim and try to be someone we can never be no matter how hard we try. What hypocrites we are!

Admit to God that you are not able to do anything good, repent and receive His forgiveness, now.

Listen to how Paul says it in the Bible: “For it is by God’s grace that you have been saved through faith. It is not the result of your own efforts, but God’s gift, so that no one can boast about it.” (Ephesians 2:8–9)

Ah let us be careful not to fall into the temptation of thinking that we are better than others because we are making more efforts. Let us not boast of our practices. Or, do you think you have the power to do any kind of practice? Do you think you can have a grateful heart without the help of God?

The time has come for us to save the whole world, to save all humanity.

Where are those who need to be saved? They are within you. They are those helpless feelings within you that, until today, you wanted to have nothing to do with.

But a new world has arrived with its new faith.

Don’t go back to that old faith that is characterized by practices and human efforts. Don’t bring down God’s altruistic love to the human level and delude ourselves into thinking that somehow we are capable of practicing altruistic love.

Rather, admit that you are already saved and are welcomed into a new world.

And save the voiceless voices within you that you’ve been ignoring until today.

This, I say, is the new faith taught by Meishu-sama that has been made known to us now through Kyoshu-sama.