From “now,” the honor of being used by God in His work of creation – Profession Ceremony under the presence of Kyoshu-sama at Shonan Church 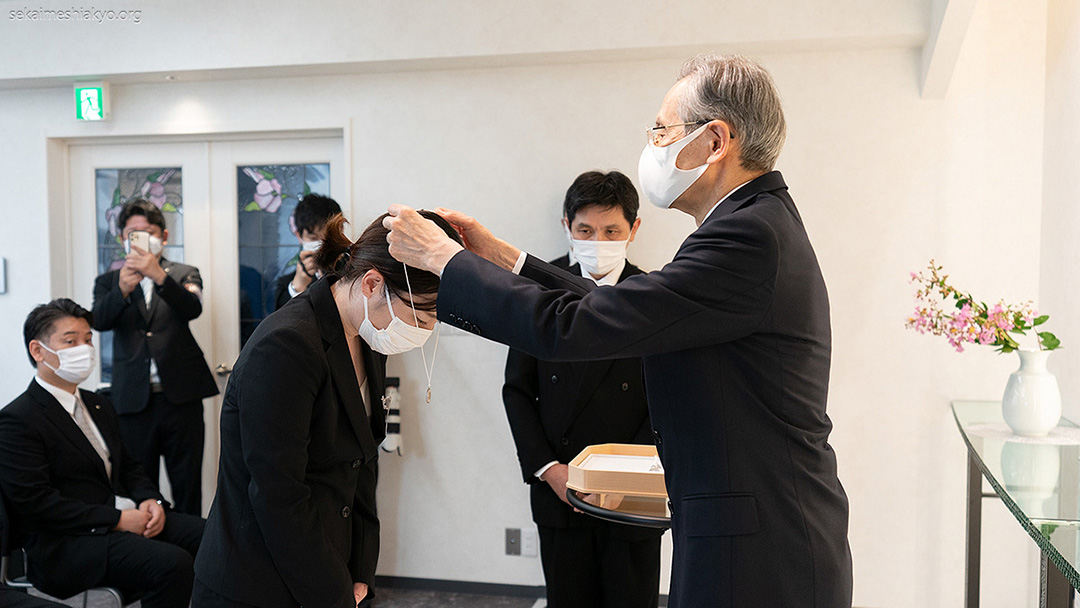 Under the presence of Kyoshu-sama, the only existence who presides over the rituals and ceremonies of our Church, a Profession Ceremony took place on August 22 at the Shonan Church of the Shinsei Region.

The construction of the Shonan Church was completed this year on June 6. Along with flower-patterned stained glass windows installed throughout the building, the underlying blue and white tones of the walls depicting the Shonan sea lend to a modern interior design.

At 1 p.m., the service began with the entrance of Kyoshu-sama into the altar area. He offered the Opening Prayer to God, then everyone offered a bow of reverence to the divine image of Meishu-sama. Next, everyone received Johrei from Kyoshu-sama.

The video “To Become Children of God: To Be Born Anew” was presented, and after a brief interval, Kyoshu-sama presented the Ohikari to each candidate wishing to profess their faith and become a member.

As a first for this ceremony, “Amazing Grace” with lyrics translated by Kyoshu-sama was heard by everyone, bringing the ceremony to a close.

Now knowing the truth that they are destined to be born anew as children of God, as Messiahs, new members began their journey on the path of true salvation revealed by Kyoshu-sama.