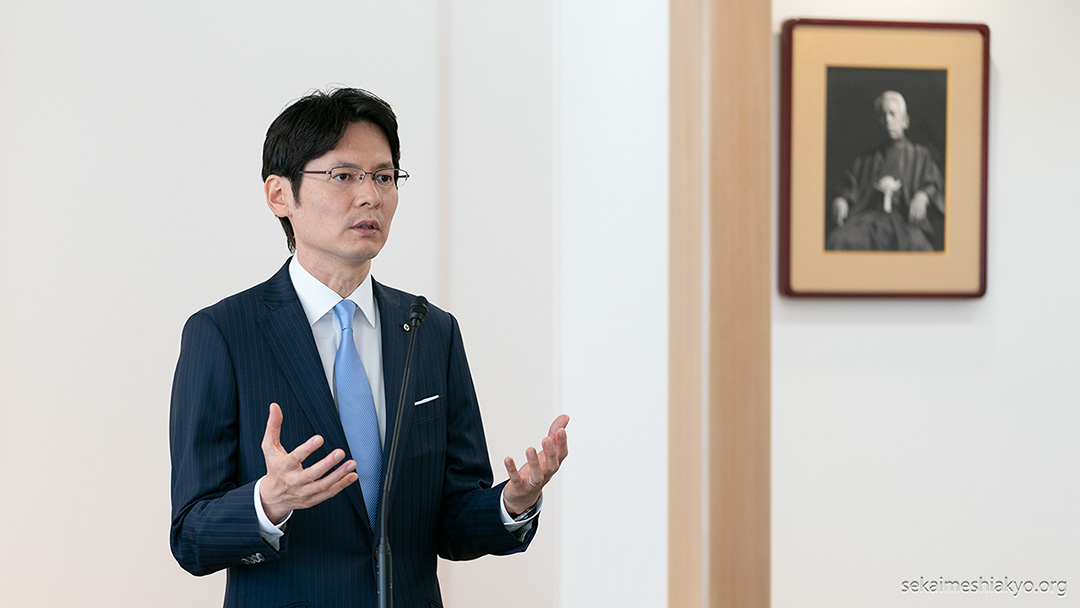 These days, we hear a lot about repentance—that we need to repent of our old ways of doing things, our old ways of faith, and that we need to repent of focusing too much on humans and not on God. It seems, then, that we committed many mistakes and errors and did things that were not corresponding to the will of Meishu-sama. It seems, then, that we are grave sinners.

Now, have we been committing those mistakes unconsciously or consciously? Have we gone against the will of Meishu-sama without noticing it or while acknowledging it? Have we become sinners without realizing it or not? Which one is it?

Maybe you want to say that you did them unconsciously, that you drifted apart from the will of Meishu-sama without noticing it, that you became sinners without realizing it. Well, is that really so?

In his hymn, Meishu-sama wrote,

“O God, I have disobeyed You and, thus, sinned! / Repentant, I now have become one who kneels before You.”

He is singing that, essentially, we put Jesus on the cross not knowing that he was the Savior.

But is that really so? Did we really not know that it was Jesus Christ when we put him on the cross? Did we punish him unconsciously? without noticing that he was the Savior?

Maybe you want to say, “We are sorry, Jesus, for not knowing that it was you!” or “Oh, they are so bad putting Jesus on the cross!”

No, it was us! We, with our own hands, put Jesus on the cross!

Were we blind? No, we were not. We saw it clearly with our own eyes. We saw who he was, and still, we put him on the cross. We knew that Jesus was the Messiah. We knew that he came to forgive our sins, but still, we wanted to kill him.

That is why, I say, we put Jesus on the cross very consciously, completely aware of who he was. It was us who wanted him dead!

Now, two thousand years after Jesus’s crucifixion, the second chance came for us.

Yet, what have we done?

After Meishu-sama passed away, we changed the name of the Church from World Church of Messiah to World Church of Salvation or World Messianic Church, saying that since Meishu-sama’s purpose is to save the world, it is okay not to use the word Messiah but instead, use words like salvation or messianic.

If Meishu-sama wanted the name of his Church to be World Messianic Church, he would have first used that exact wording in Japanese, which sounds like Sekai Meshia-teki Kyo. But he didn’t do that. He used Sekai Meshia Kyo, World Church of Messiah.

Through World Church of Messiah, through announcing that he was born anew as the Messiah, Meishu-sama wanted to show that all humanity is destined to be born anew as children of God, Messiahs, and that the soul of Messiah does not exist in Jesus only but within all humanity. How great is the salvation that Meishu-sama left for us and for humanity!

But oh, wasn’t it inconvenient for us to know that the king, the Messiah, exists within us? So we yet again tried to do away with it, hiding the name of the Church Meishu-sama originally created and not admitting that the soul of Messiah exists within us.

Suppose one day you meet God and He asks you, “My child, you rebelled against Me, didn’t you?” If God tells you that, what are you going to say? Are you going to say to Him, “Oh, my Father, I did all those things unconsciously. I did them without realizing that they were sins. But someone told me that I need to repent, so maybe You can forgive me?” Are you going to say something like this?

But then there is another person standing next to you who says to God, “Yes, You are right, my Father. I turned my back against You with my own will, rebelled against You and sinned. I have no right to be forgiven by You. Please punish me in whatever way You think is necessary.”

It will, of course, be the one who recognized the sin, don’t you think?

I don’t want you to misunderstand. We need to repent not because someone told us to but because of who we are.

Do not underestimate the severity of God. Maybe the clever excuses we make can fool humans, but we will never be able to fool God with our crafted excuses.

As the Bible tells us, God “judges the desires and thoughts of the heart. There is nothing that can be hid from God; everything in all creation is exposed and lies open before his eyes. And it is to him that we must all give an account of ourselves.” (Hebrews 4:12–13 GNT)

Everyone, how I wish God accept the accounts that each one of us gives to Him.

Now, with Kyoshu-sama, we are receiving the third chance—our final chance.