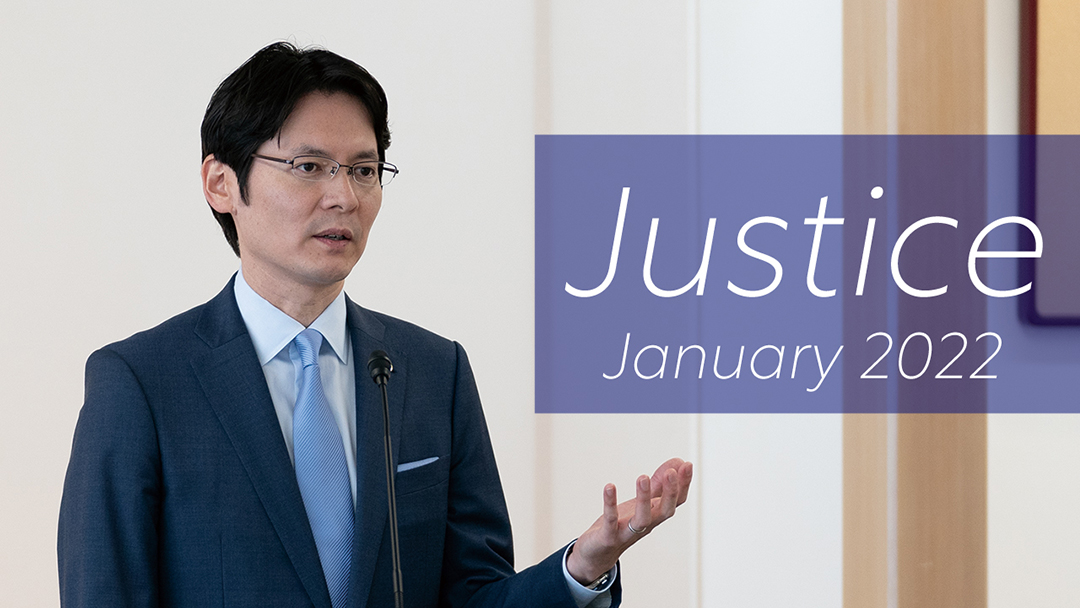 “I am ready to fight against the whole world in order to defend justice.”

Do you know who said this? Meishu-sama.

Meishu-sama was ready to face the entire world for the sake of protecting justice. Even though he could have lost the whole world, everything he had, he was willing to stand up and fight for justice.

I think we all underestimate how strong Meishu-sama’s sense of justice was. He said that he “will save the righteous whatever it takes and by any means necessary” and “completely and utterly wipe out the evil from the face of the earth.”

He said, “What counts the most is the unyielding will to defend justice whatever it takes.” “The only way to judge the value of a person is to see whether they have this will or not. The stronger this will is, the more valuable a person is. If you lack this will, you are just an opportunist who only thinks of your own interests, that is, you are a human only in appearance with no substance, no guts.” And he says, “But, to tell you the truth, nowadays, almost everybody has become like this.”

Have you become like this and lost the sense of justice, too?

Or are you willing to stand up for justice whatever it takes? Are you ready to sacrifice everything you have for justice?

Or would you rather compromise? Would you rather turn your eyes away from an apparent evil so that you can hold onto your worldly possessions, your own interests?

Secretly following, wiretapping and filming someone.

This act might be tolerated in society if one has good reason to do so. But for people of faith to do this? It should never be tolerated.

Meishu-sama is saying that to do something behind someone’s back is the same as stealing, the same as an act of a thief.

For Meishu-sama, the act of secretly following and filming someone is an act of a thief, an act of stealing.

Stealing is an evil act, of course. So for Meishu-sama, secretly following and filming someone, of course, is an evil act—an act that needs to be wiped out from the face of the earth.

I mean, to be honest, I am ashamed that I even need to say these things to you. You should know better. How can the act of secretly following and filming Kyoshu-sama and his wife be tolerated? Have you completely lost your sense of justice? Are you blinded by your own interests? Have you stopped being a human being as Meishu-sama rightly pointed out?

So, accepting the ousting of Kyoshu-sama is the same as accepting and tolerating the act of stealing, the act of a thief.

To those who say, “This topic, again?” or “I don’t want to listen to this anymore,” let me say: wake up. Wake up to the sense of justice Meishu-sama had. Don’t you know that he even wanted to own a newspaper company in order to bring social justice and correct the wrongs of the world?

I understand how Kyoshu-sama might have been a cause of trouble for some people who wanted to do things their own way. But look at how they dealt with Kyoshu-sama. Look at how they treated people who were inconvenient to them. They didn’t choose to talk with Kyoshu-sama. Rather, they decided to secretly follow him to obtain some kind of information on him and use that information to control him. How horrible this attitude is. It is definitely not something that should be tolerated. And, by the way, the information you obtained against Kyoshu-sama was that he has a Christian friend and that he is studying the Bible? Really?

Let me say this to you so that there is no misunderstanding from now on: for followers of Meishu-sama, secretly following and filming someone and using that information behind closed doors so as to control others are acts that can never be justified no matter what the reason.

I mean if you admit to the ousting of Kyoshu-sama, it is the same as admitting that you have given up on the teaching of “love for others” that Meishu-sama so emphasized. Where does the love exist in the act of secretly following and filming someone and then trying to control them through the information obtained from that act?

And yet you say, “love for others is important,” “make others happy so that you can be happy”? What hypocrites!

If you admit to the ousting of Kyoshu-sama, it is the same as admitting that you have given up on constructing a paradise on earth. What kind of a paradise is it if the act of secretly following and filming someone, then trying to control that person through the information obtained from that act is being tolerated?

You say, “We have all the artworks!” “We have the museums!” You have all those artworks and museums for what? Meishu-sama taught us that the most beautiful masterpiece, the most important artwork of God is a human being. And yet you carry out and tolerate that cowardly, disgraceful act toward Kyoshu-sama and his wife? If you don’t know how to treasure and respect human beings, there’s no way you can treasure and respect any artwork. So basically, there’s really no point in you owning those artworks. All the artworks are being tainted every time you touch them—those same hands that committed that ungodly act.

I mean, how can I say that you are a follower of Meishu-sama? For Meishu-sama’s sake, I can’t do that.

You are just a self-proclaimed follower of Meishu-sama.

To you who stood up for Kyoshu-sama, to you who did not tolerate that cowardly act, congratulations. But beware: if you judge those who accept the ousting of Kyoshu-sama even a little, if you think you are better than them even a little, “God will judge you in the same way you judge” them. God “will apply to you the same rules you apply to” them. (Matthew 7:2)