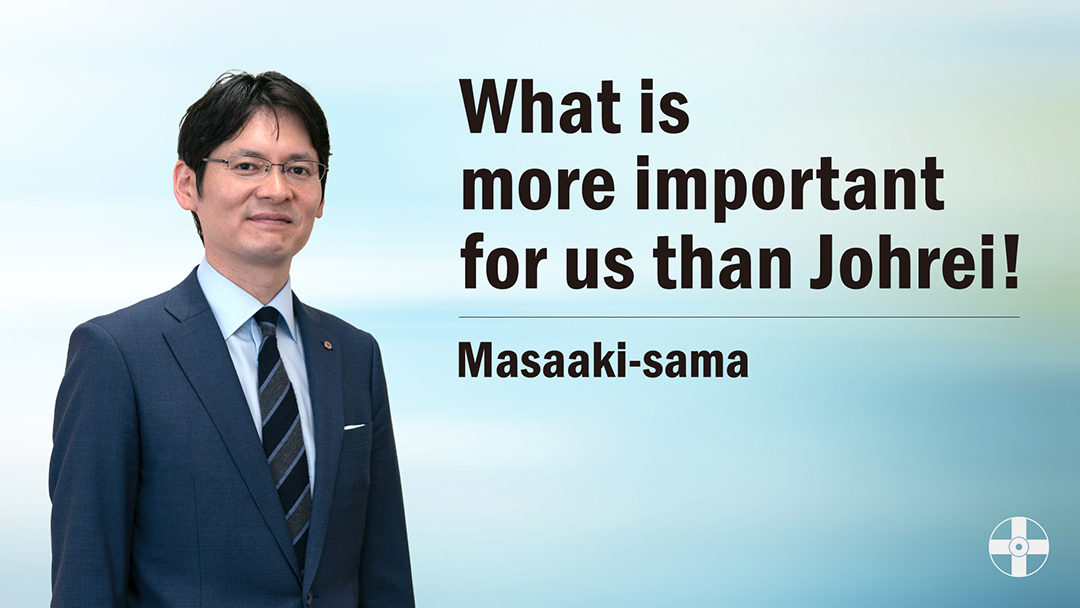 PDF file: “What is more important for us than Johrei!” – Masaaki-sama’s Message No.11

As followers of Meishu-sama, the only thing we really want to know is this: What did Meishu-sama say or do regarding Johrei? Right?

I mean if you don’t know what Meishu-sama said or did regarding Johrei, how do you know you are on the right path? You may be doing or believing in something that is completely against the will of Meishu-sama.

But during these ten months, his last ten months on earth, Meishu-sama said so many things about Johrei.

Unfortunately, most of the things he said during these ten months were not published in the Church publication since Meishu-sama was suffering from the stroke. They were not left as what we usually know as the Teachings of Meishu-sama or the Sacred Word of Meishu-sama.

However, the close assistants to Meishu-sama who lived with him during this time wrote them down, and we have those records.

April 19, 1954, one day after the Easter Sunday of that year, Meishu-sama received the purification of the brain hemorrhage.

Let me say that even though his right arm and leg were affected by the stroke, his left arm and leg were not—that is, if he wanted, he could have raised his left hand to do the Johrei. But Meishu-sama chose not to do so. Instead, he decided to do Johrei through sonen, without raising his hand.

On the same day, April 28, Meishu-sama said the following to his assistants: “From now on, I will do everything with words and sonen.”

Meishu-sama was saying that he was going to do everything with words and sonen, so when he practiced Johrei, he didn’t raise his hand but did it through sonen.

He actually said these words. This is a fact. At least two of his close assistants wrote these words down. You have to consider the gravity of this statement by Meishu-sama. He said he discovered a new Johrei through sonen.

On June 2, it is recorded that Meishu-sama said the following: “God told me not to practice Johrei on myself. God told me that when the time comes, He will do what is best for me, so don’t do Johrei.”

The next day, on June 3, Meishu-sama in the morning told his assistants the following: “In the middle of the night, I ended up doing self-Johrei even though God forbade me to do it. Because of that, I wasn’t able to sleep.”

What an episode this is! Meishu-sama acted against the will of God, and for that, God in a way punished Meishu-sama and did not allow him to rest at night.

On top of all these records, I am quite sure you already know this, but after receiving the brain hemorrhage, Meishu-sama said to his assistants repeatedly that we have entered the world of sonen, that Johrei is not so important anymore, that sonen comes first and that we need to pray in our hearts, rather than raise the hand of Johrei.

One justification was this. About eight months after the purification, on December 11, 1954, it is recorded that Meishu-sama told his secretary to consider three points when thinking about the personnel of the Church.

Meishu-sama was saying that we have to take these three points into consideration when thinking about running the organization.

For a long time, these three points were considered the last words, the last will of Meishu-sama, as Meishu-sama passed away just two months after he made this remark.

Well, is this thinking really correct?

Let me introduce to you another record from Meishu-sama’s assistants.

On December 11, on the same day that he announced the three points I just mentioned, it is recorded that Meishu-sama ministered Johrei to one of the members. He performed this Johrei for about a minute. After the Johrei, Meishu-sama said, “Next time, it won’t take even a minute to Johrei a thousand people.”

That is, the light and power of Johrei would be so strong that only less than a minute was needed to Johrei a thousand people.

But how would you feel if you receive Johrei for just a few seconds in your church? Wouldn’t you think, “Why is the Johrei so short?”

To feel like that in itself is the very proof that we are going against the direction that Meishu-sama was heading.

Haven’t we been saying things like, “Oh, you need to do Johrei longer,” “Let’s do Johrei for hours and hours,” “Let’s raise our hand of Johrei anytime, anywhere,” “If purification is strong, Johrei from a number of people is needed”?

How mistaken we have been!

Wake up and realize that your Johrei has been completely against what Meishu-sama actually wanted.

Wake up and realize how we have completely disrespected and overlooked the power and light of God.

When we consider all this, the will of Meishu-sama for us today is all too clear: the time of practicing Johrei through raising the hand is already gone. It is long gone. And now, we live in the world of sonen where we need to do everything through words and sonen with a repentant heart, just as Meishu-sama said 68 years ago. We live in the world where we need to practice the new Johrei through sonen that Meishu-sama discovered 68 years ago.

On February 4, 1955, six days before his ascension, on the day of the Beginning of Spring Service, Meishu-sama said that once he recovered from the stroke and was able to speak more, he was going to say something that would be totally unexpected and surprising for us and asked us to look forward to it.

Don’t you want to know what Meishu-sama wanted to tell us?

Don’t you want to know what “the new Johrei through sonen” was?

Listen to what Kyoshu-sama is saying.

The truth of Meishu-sama, the truth of Johrei—this is what Kyoshu-sama is teaching us right now.