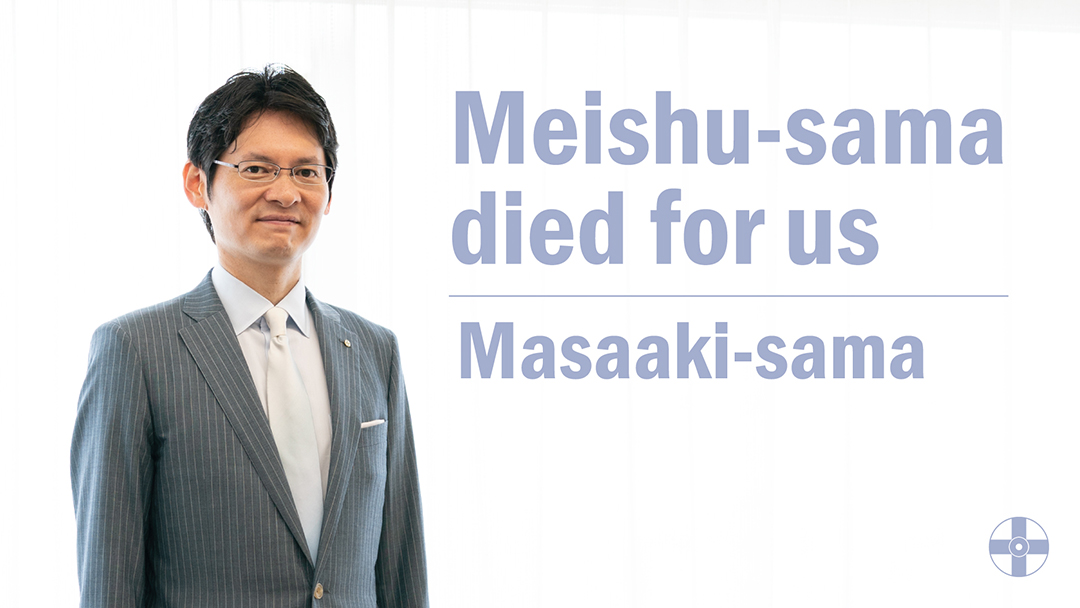 At this moment, are you alive or dead?

Does God consider you to be a living existence or a dead existence?

Are you walking toward a glorious future or toward a doomed future where you will die in the end, through disease, accident or because of age?

About two weeks prior to that, on May 20, he sent some people to the local shrine nearby to report that a new baby was born.

In Japan, when a baby is born, it is customary to pay a visit to the local shrine about 30 days after its birth.

For Meishu-sama who believed that he was born anew when he received the purification of the brain hemorrhage on April 19, May 20 was just about the time when he thought he should be reporting it to the shrine, and that was exactly what he did.

Think: Meishu-sama reported his birth to the nearby shrine. That means Meishu-sama considered himself practically non-existent or a dead being before his birth on April 19.

And when he was born anew as God’s child, Meishu-sama said that it was not reincarnation but a new birth, meaning the life he received from God on April 19 was not a life that was a continuation from before but an entirely new one.

Up until he was born anew as a child of God, Meishu-sama considered himself to be not living, to be a dead being.

Has any of you attained eternal life?

Has any of you been born anew as a child of God?

If not, can you say that you are alive now? Are you alive now, really? Are you sure? Are you sure that God considers you to be a living existence?

To be frank, if we have not yet been born anew, it is the same as being dead at this moment.

What we should be afraid of now is the fact that we are like dead beings and are not able to attain eternal life.

Everyone, Meishu-sama sent people to the local shrine to report that a baby was born, that he was born anew: a 71-year-old man, full of gray hair, suffering from a stroke, half his body immobile.

Was Meishu-sama out of his mind?

Am I out of my mind for telling you that we are dead at this moment?

I am being out of my mind for you, for us—for us to truly follow Meishu-sama and attain eternal life.

Meishu-sama left this episode for us so that we would realize that we are like dead beings unless we are born anew as children of God, as Messiahs.

We say to the world that each human being is destined to be born anew as a Messiah. For this, society may tell us that we are crazy and that we are out of our minds.

Are we out of our minds? Are we crazy? Are we believing in something laughable? Are we lost? Are we misinterpreting the teachings of Meishu-sama, the truth of God?

Many of us received miracles from Johrei—illness healed, life prolonged. But for what? For you to think that this physical life you have and this physical body you carry are so precious that you want to keep them for as long as possible? Of course not! That’s not why Meishu-sama gave you those miracles.

Meishu-sama granted you those blessings for you to awaken to eternal life!

Instead, what have we been doing?

Once we received a miracle, didn’t we end up wanting more miracles, thinking that human health and life are the most important things, ministering Johrei only for the betterment of health and longevity of life?

Repent and wake up.

If we had been able to awaken to the true treasure of eternal life when we received our blessings, Meishu-sama would not have needed to die that early through an illness. Don’t you know that he said he would live until a hundred and twenty? Why didn’t he live until then?

It was because of us. Because we who received miracles didn’t understand the reason why we received them.

He died for us who were blinded by miracles.

He died for us who ended up treasuring human health and life above everything else.

He died for us who have been walking against his will.

He died for us so that we may live, live in the eternal life of God.

Next month, on June 15, we are going to hold the Grand Ceremony to Celebrate the Birth of the Messiah.

It will be an occasion when we make a promise, in the name of Kyoshu-sama, to God, Meishu-sama and Jesus Christ that we will be walking on the path to be born anew as children of God, as Messiahs.

For those who think that they are alive now, attending the ceremony would be of no use.