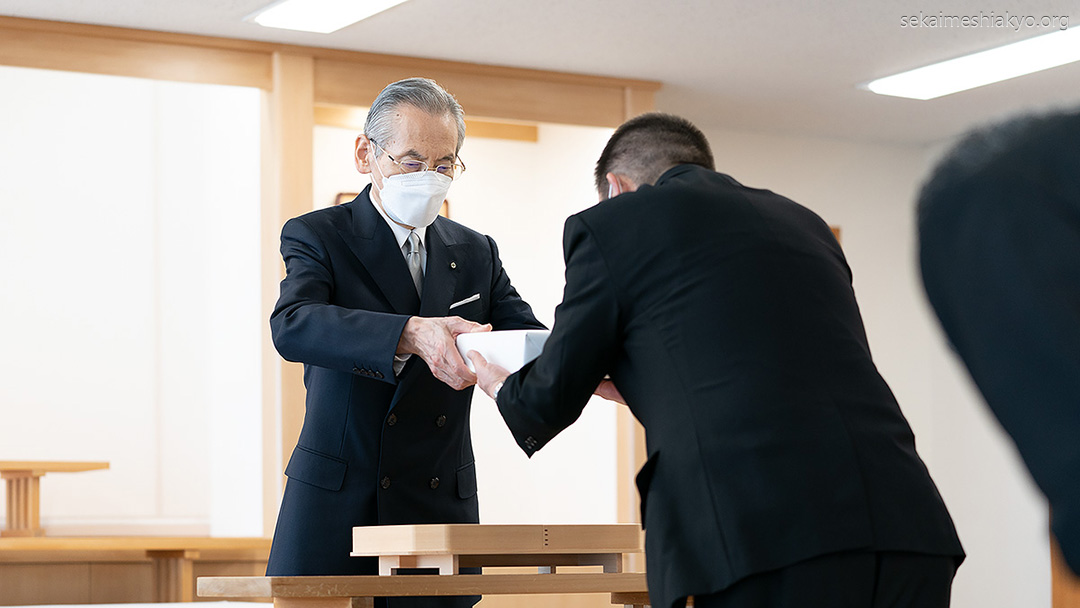 The Consecration Prayer and Presentation of Sacred Objects officiated by Kyoshu-sama were held on April 12 in the headquarters altar room.

First, the Consecration Prayer took place with the presence of Masaaki-sama, Kyoshu-sama’s successor, and with the attendance of President Narii representing the Church. The prayer of consecration by Kyoshu-sama, who is leading all of humanity to true salvation without exception, was so intense that it shook every cell in my entire body and it was as if all of creation were bowing down in awe and in gratitude of it.

The Consecration Prayer is a holy ritual that has been held since Meishu-sama’s lifetime. After Meishu-sama’s ascension, this sacred duty has been passed down uninterrupted to successive Kyoshu-samas: Nidai-sama, Sandai-sama and through today to our fourth spiritual leader Yoichi Okada, Yondai Kyoshu-sama.

It is precisely because the successive Kyoshu-samas, as the Masters of Rituals and Ceremonies, have consecrated material objects such as divine scrolls, divine images of Meishu-sama and Ohikari that they are appropriate pure and sacred objects that can be dedicated on the altar. No one can be a substitute for Kyoshu-sama and hold the Consecration Prayer.

In other words, without Kyoshu-sama officiating the Consecration Prayer, divine scrolls, divine images of Meishu-sama and Ohikari would be mere objects, and it could be said that our daily activities of faith including guiding non-members and praying would all be in vain.

For us with faith in Meishu-sama, being united with Kyoshu-sama cannot be replaced by anything, and we cannot help but be truly grateful for this.