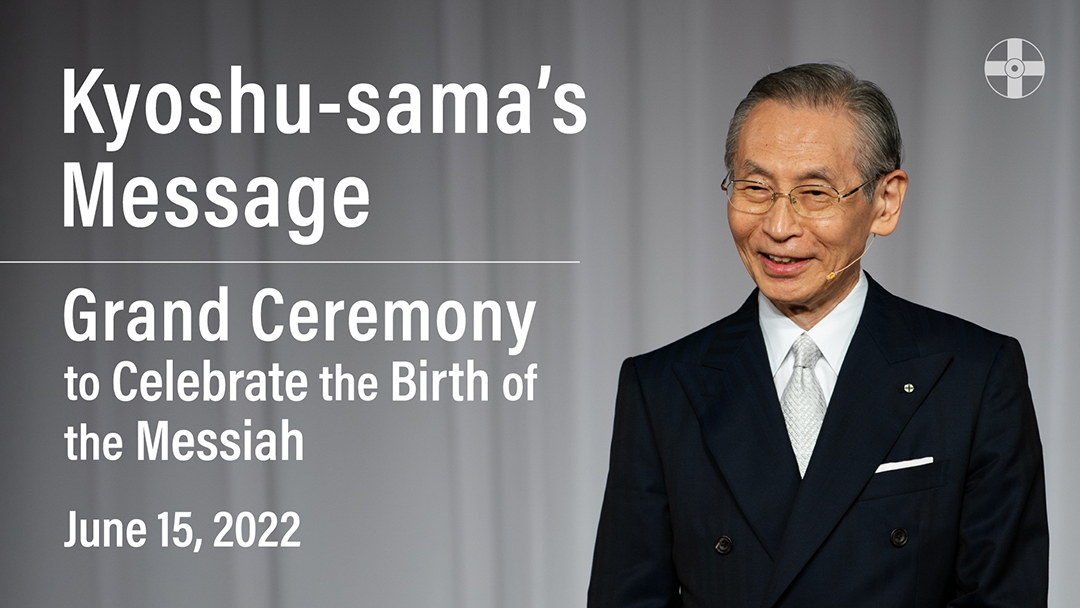 PDF file: 20220615_Grand Ceremony to Celebrate the Birth of the Messiah_Kyoshu-sama

Congratulations, everyone, on the Grand Ceremony to Celebrate the Birth of the Messiah.

In deep awe and fear of God, let me say, everyone, that heaven has already become a new heaven and that earth has become a new earth.

The boundary that existed between heaven and earth has already disappeared. Earth is now enveloped in heaven.

By forgiving us humans, God put an end to the way we have led our lives until today.

He now wants to welcome all of us into His heaven and merge with us.

Actually, all creation and we humans are already welcomed into a new world.

Within us is a new world.

Do you know when the world became new?

It was two thousand years ago.

Two thousand years ago, God sent Jesus to the world and put him on the cross in order to atone for the sins we humanity committed against God.

Jesus offered his very own blood to God and implored God for the forgiveness of sins on behalf of all of us.

By accepting this atoning blood, God forgave our sins of the past, present and future with His unfailing love.

God then resurrected Jesus by raising him from the world of the dead. Not only that, fifty days after the resurrection, that is, on the day of Pentecost, God filled Jesus’s apostles with His Holy Spirit.

This Holy Spirit penetrated heaven and filled everything that existed on earth, transforming the world into an entirely new one.

Two thousand years ago, when we were in heaven together with Meishu-sama, we received the light and power of this Holy Spirit together with everyone and everything.

Two thousand years later, Meishu-sama was sent to earth, to a country called Japan. And on June 15, 1931, he received the Holy Spirit of Pentecost once more, expressing it as the Transition from Night to Day.

Meishu-sama was the first among us to receive the advent of a new world that was brought about by the great transition when the Holy Spirit descended to the earth two thousand years ago.

Meishu-sama did not keep this gospel to himself. He took charge with a burning desire to convey it to as many people as possible.

In every way he could, he tried to let us know that the world had transitioned from one where human beings act as the masters into one where God acts as the master. He devoted all his heart, soul and body to waking us up to the truth.

When he founded World Church of Messiah in 1950, Meishu-sama vehemently told us that he wanted to act in concert with the Christians for the salvation of all humanity.

Christians believe that Jesus is the Messiah—Jesus who accomplished the atonement of sins and the resurrection.

It is these Christians together with whom Meishu-sama wanted to advance salvation.

From the very early stages of his divine work, Meishu-sama strongly believed that the name of Messiah was a very important name.

The will of creation is imbued in the name of Messiah.

The authority, grace and power of atoning for, forgiving, saving and reviving all humanity and thus making them all God’s children are imbued in this name.

Four years after the founding of World Church of Messiah, on April 19, 1954, Meishu-sama suddenly collapsed from the brain hemorrhage. As a consequence, the right side of his body was paralyzed.

During this difficult and hard time, Meishu-sama constantly sought the will of God and communicated with Him.

We humanity took the eternal life of God for human life, thinking that life had a limit. We were trapped in the notion of death.

Representing all of us, Meishu-sama repented of how he had taken possession of the soul that rested within him, accepted and received the atoning blood of Jesus Christ and offered his soul to God.

What a joy this must have been for God.

Being the first among us, Meishu-sama experienced this joy of God for us.

Filled with this joy, on June 5, 47 days after the stroke, Meishu-sama announced the birth of the Messiah to the leading ministers of the time.

At that moment, Meishu-sama, with a smile on his face, said that it was not reincarnation but a new birth.

By saying that it was not reincarnation, Meishu-sama was letting us know that human beings are not existences that will return to the earth after they die, but rather, they are existences that are predetermined by God to live in God’s eternal life, a truth that goes beyond the notion of birth and death we usually possess. That is, Meishu-sama was letting us know that all human beings are predetermined to be born anew.

God forgave and liberated us who were trapped in the notion of death and made us into ones who can live eternally.

This, I say, is nothing other than the joy of life that God granted to us.

This joy exists within us.

Ten days later, on June 15, Meishu-sama held the Provisional Ceremony to Celebrate the Birth of the Messiah.

During the ceremony, the president of the Church at that time asked Meishu-sama for the forgiveness of the sins of all humanity. Meishu-sama accepted this request with a nod.

It is recorded that those who participated in the provisional ceremony were filled with such joy that they could not hold back their tears. What an emotional occasion it must have been.

As I just said, Meishu-sama nodded to the request asking for the forgiveness of sins. Through this nod, he was conveying to us the will of God—the will that we were made into ones whose sins were forgiven through the atoning blood that Jesus offered to God.

This forgiveness of sins came from the Holy Spirit of Pentecost that God emitted after He received the atoning blood of Jesus.

We were welcomed into a new world through the Holy Spirit of Pentecost.

A new world exists within each and every one of us.

Through the provisional ceremony, I firmly believe that Meishu-sama was sharing this blessing with us.

Even though we received this blessing from Meishu-sama, we have not responded to it until now.

For us to be able to respond to this blessing, God is holding the Grand Ceremony to Celebrate the Birth of the Messiah today, 68 years after the provisional ceremony.

God is holding the grand ceremony within each one of us.

In order to respond to this blessing of God, we have a duty to receive the Holy Spirit of Pentecost together with everyone and to serve in the work of sharing it with everyone, just as Meishu-sama did.

Do not forget: the One who blessed us with forgiveness is God, and God only.

What is more, it is only through the will of God that we are able to respond to His blessing.

That is why we need to, first and foremost, offer our most sincere gratitude to God who possesses the authority to forgive.

Let us engrave this deep into our hearts. Let us also set firmly in our hearts today, on this day of the grand ceremony, that we will be born anew as children of God, Messiahs, following in the footsteps of Meishu-sama.

Meishu-sama wants us to save the whole of humanity by working in concert with Christians. Today, let us make a pledge to Meishu-sama that we will accomplish his wish.

Thank You, O God, for allowing us to serve You in this way. Through the name of Messiah, I return all authority, glory and blessings to You who are the only God.