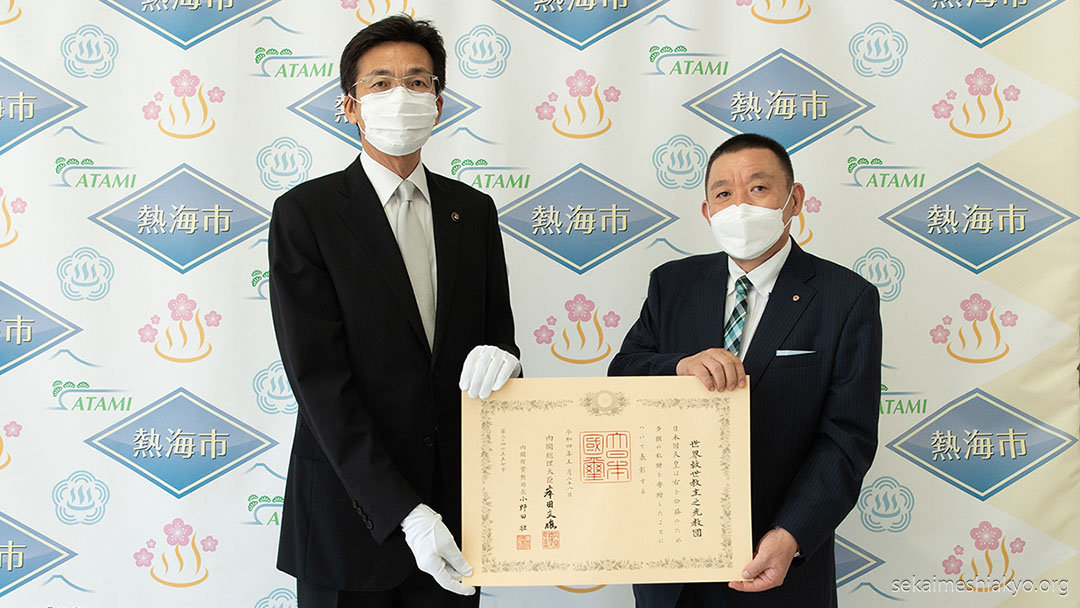 On May 28, 2022, World Church of Messiah (Headquarters: Atami City, Shizuoka Prefecture; President: Keiichiro Narii) received the Dark Blue Ribbon Medal of Honor, as approved by the Cabinet, for the donation of 30 million yen (approximately US$273,000 at the time) to Atami City to provide support to those who were affected by the Izusan mudslide that occurred in July 2021.

On Tuesday, August 2, a ceremony was held at the Atami City Hall, where President Keiichiro Narii received a certificate of commendation from Mayor Sakae Saito.

Furthermore, on this day, World Church of Messiah newly donated 20 million yen (approximately US$150,000) to the city for additional support. Together with the donation of 30 million yen in July of last year, the Church has donated a total of 50 million yen in support of the post-disaster recovery.

Atami is the place where our founder, Mokichi Okada, dearly loved and spent his final years. World Church of Messiah under the leadership of the founder’s grandson, Yoichi Okada Yondai Kyoshu-sama, will continue to contribute to the development of Atami. We pray for the further reconstruction and restoration of Atami from the severe damages of the mudslide. We pray that the souls of those who fell victim may rest in peace, and we extend our heartfelt sympathies to all those who have been affected.

“Congratulations on receiving the Dark Blue Ribbon Medal of Honor. I would like to take this opportunity to express my gratitude for the generous donation made by your Church following the mudslide disaster last year. Thank you very much. We were able to distribute the donation we received to those who were affected through the Donation Distribution Committee. Tomorrow will mark one year and one month since the disaster occurred. We will continue to move forward with the reconstruction and restoration of the affected areas, one step at a time, while also continuing to support those who were affected.

I would also like to express my sincere appreciation for your additional monetary donation at this time. We will use the donation with great care for the reconstruction and restoration of the city and to provide support to those who were affected.”

About the Dark Blue Ribbon Medal of Honor

The Dark Blue Ribbon Medal of Honor is awarded to individuals or organizations that have donated private funds to the national government, local governments or public interest groups for the good of the public.