An eternal and majestic ceremony; A complete renewal of heaven and earth; All members make a pledge under the leadership of Kyoshu-sama—Grand Ceremony to Celebrate the Birth of the Messiah 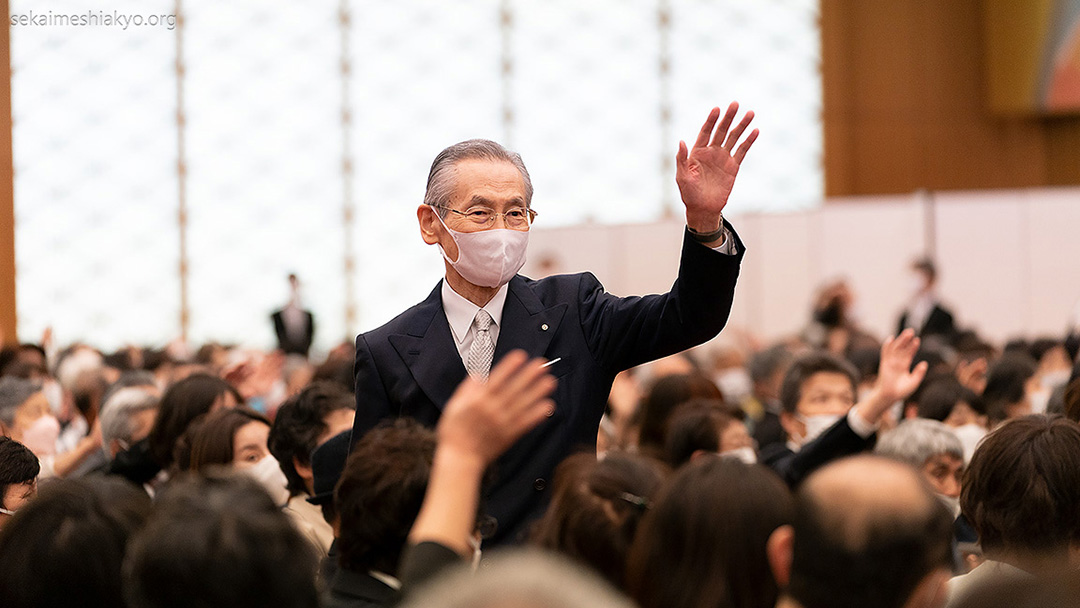 The time of heaven has come.

On June 15, 2022, the one and only Grand Ceremony to Celebrate the Birth of the Messiah—a ceremony ­that will divide human history into before and after—was held under the leadership of Kyoshu-sama, who served as officiant. From Hotel Okura Kobe, the main venue, a live broadcast was relayed to twelve satellite venues in the country. At the main venue, Kyoshu-sama and Masaaki-sama, who is Kyoshu-sama’s successor, were present, and for the first time, Mami-okusama, Masaaki-sama’s wife, was also present. In addition, Masaaki-sama and Mami-okusama’s daughters, Mei-sama and Miyu-sama, participated in the ceremony from a private reception room. On this day, 10,000 people connected to Kyoshu-sama gathered at the thirteen venues located all over the country.

The ceremony opened splendidly with The Messiah Choir’s performance of “A New World,” an original song of World Church of Messiah with lyrics written by Kyoshu-sama for the first time. Then, Kyoshu-sama made his entrance, as if coming down to earth to announce the arrival of a new world. With a firm voice, he offered “Our Pledge” to God, the Heavenly Father. Then, the assistant officiant sang Meishu-sama’s hymns, and together, everyone listened to Meishu-sama’s Sacred Word and the Bible. After the congratulatory messages were shared, President Narii introduced the guests and concluded his greeting.

At last, Masaaki-sama took the podium. His gaze was set not only on the World Church of Messiah members, but also on Christians, on all of humanity, and on the entire world. I cannot help but wish to see the same scenery as him.

After The Messiah Choir’s sonorous performance of the “Hallelujah” chorus from Messiah, we welcomed the finale of the ceremony. “You Become Me,” an original song of World Church of Messiah with lyrics written by Masaaki-sama, was performed for the first time. I could not have been the only one who felt the significance imbued in the birth of the Messiah through the mystical lyrics that showed the truth.

As “A New World,” with lyrics written by Kyoshu-sama, was being played, Kyoshu-sama, Masaaki-sama and Mami-okusama left the venue. In that moment, their appearance seemed to me as if they were leading us and moving forward in the new world. We will also go. As we see them off with thunderous applause, let us follow right after them.

The love that God, the Heavenly Father, has continued to pour into us, transcending time and space. The deep emotions I feel from having been allowed to respond to this love with a great celebration, and for having been able to participate in it, even if in a small way. This was all possible because of Kyoshu-sama. It was possible because of Mayumi-okusama, Masaaki-sama and Mami-okusama, who are one with Kyoshu-sama. Now, with the flood of emotions that surges within me, I cannot help but say, “Without Kyoshu-sama, there is no us.”

“Reunion with God” by Masaaki-sama, Grand Ceremony to Celebrate the Birth of the Messiah [English subtitles]
https://youtu.be/paS8mNsMkTM