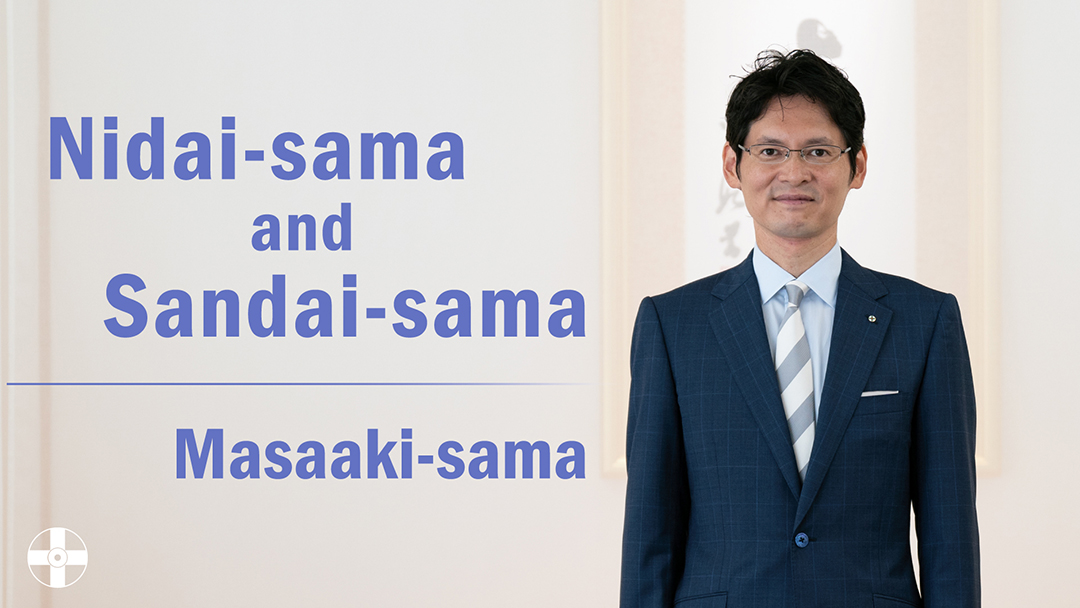 “Recently, I have heard that the course of my guidance and the course of Meishu-sama’s guidance are different. This is a grave mistake. Let me say, there is a constitution of the Church, an unwritten charter. This is something intangible over the current structure of the organization, and this unwritten charter must come before any other rules. What is it? It is that God and Meishu-sama have established Kyoshu in order to guide the Church. God has made it this way. Therefore, the major directions of the Church come from God and Meishu-sama through my mouth. If you cannot understand this, you are not a member of this Church. And it means that you do not have true faith in God.”

“The course we must take in the world now is conveyed to me by God and Meishu-sama. This exists in a straight line. The very top is God. Next is Meishu-sama, and below that is me, Kyoshu. Being that this is a straight line, it all flows to me. In this way, we properly receive the major directions from God. If you cannot place confidence in this, it is the same as not placing confidence in God.”

“If you do not recognize Kyoshu, you cannot be called a person of the Church.”

These are what Nidai-sama said.

Everyone, if you do not recognize Kyoshu-sama, never mind secretly following and filming him and kicking him out, you cannot be called a person of the Church. Whose Church is it? Meishu-sama’s Church, of course.

“As the word Kyoshu literally indicates, it means the ‘master of the teachings.’ During Meishu-sama’s lifetime, he was the founder of the religion and Kyoshu at the same time. The paramount leader and person responsible for how to guide and educate the members is the Kyoshu of that time. In other words, Kyoshu decides how to interpret, compile, unify and disseminate the teachings.”

To say that all of these words of Nidai-sama are important to us is an understatement.

What does she have to say to us?

“Even though Meishu-sama has already returned to heaven, some of you say that you can only listen to the words of Meishu-sama. To these people, I say: then go back to the spiritual realm already. The times change. People change, too. So, as long as you are here on earth, of course you have to receive your mission through Kyoshu who is living here on earth in a physical body.”

“To protect the work of Kyoshu no matter what—it is only when you have this kind of sincere heart that the sacred grounds flourish, that the Church does not split and that your faith, the members’ faith, remains secure.”

And then she said:

“For the divine work of the Church, for God’s plan to advance without distortion, a center is necessary. That center is the holy seat of Kyoshu. We need a seat, a position, to unify all activities of divine work. This seat is nothing other than the holy seat of Kyoshu. To carry out religious activities with Kyoshu as the center allows for the eternal continuation of unfaltering divine work through even the fourth, fifth, sixth and following Kyoshus. Instead, the executives set Kyoshu up onto a high place without power, and they thought that they were in control—the executives whose direction is always unstable because of their fixed terms. And they say they are ‘sacred-grounds-centered’! How can Meishu-sama bless these sacred grounds? He cannot.”

“The executives set Kyoshu up onto a high place without power, and they thought that they were in control—the executives whose direction is always unstable because of their fixed terms. And they say they are ‘sacred-grounds-centered’! How can Meishu-sama bless these sacred grounds? He cannot.”

To you who kicked Kyoshu-sama out, let me say this in the name of Sandai-sama: Your sacred grounds are not blessed by Meishu-sama anymore, meaning, they are not sacred anymore. They are just gardens without any relation to Meishu-sama.

And actually, it was quite ironic that the very people who own and treasure all the sacred grounds, or should I say gardens, were the ones who eliminated Kyoshu-sama from their Churches this time around.

This essentially means that at the moment, there are no sacred grounds of Meishu-sama here on earth. Oh, we are so sorry for this, Meishu-sama! For Meishu-sama’s sake, maybe the time has come for us to build one, with our own hands.

Some of you say, “Why do we have to follow Kyoshu-sama in the first place? Can’t we just follow Meishu-sama alone?”

Good question. Consider the following: On February 10, 1955, just before Meishu-sama passed away, he left his last words, that is, he expressed his last desire here on earth. And that was for Nidai-sama to be Kyoshu and lead the Church after his ascension. We know this fact because Nidai-sama announced this to the members on the same day, on February 10, right after the ascension of Meishu-sama.

But his last words here on earth were about Nidai-sama, that is, they were about Kyoshu, and how he wanted another Kyoshu to inherit his sacred work. That was what Meishu-sama desired the most just before he passed away.

We say one thing, and we say something else later. And it is obvious that the later something is said, the more important it is. In other words, the most important thing Meishu-sama said here on earth—the most important thing Meishu-sama said here on earth—was how Nidai-sama was going to carry on his work as Kyoshu, as the second spiritual leader, after his ascension.

For Kyoshu to inherit his work—this was Meishu-sama’s last will, his last words.

So those who disregard Kyoshu-sama disregard Meishu-sama, his last words and his will.

And as Nidai-sama said, someone who does not recognize Kyoshu-sama is in fact ignoring Meishu-sama and cannot be called a person of the Church, that is, this person is not a follower of Meishu-sama.

For us, sacredness comes from Meishu-sama.

That is, the true sacred grounds is where Kyoshu-sama is, for that is where Meishu-sama is.

You who cannot understand this are not a follower of Meishu-sama nor a believer in God.